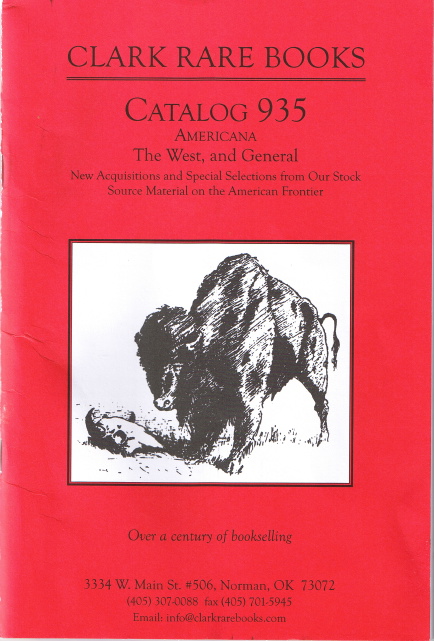 Clark Rare Books recently published their Catalog 935 of Americana, The West, and General. This collection includes many new acquisitions, primarily on the westward moving American Frontier. Clark's catalogues are always appealing for those who collect or are interested in the American West. They include both books published when the Old West was still new, and more recent accounts of or reprints from those earlier days. Here are some of the items offered in this latest Clark catalogue.

Item 113 is a Special Edition of the accounts of Zebulon Pike's explorations: The Expeditions of Zebulon Montgomery Pike, to the headwaters of the Mississippi River, through Louisiana Territory, and in New Spain, during the years 1805-6-7. This three-volume set from Elliott Coues was published in 1895 in just 150 copies. Along with a reprinting of Pike's original work of 1810, it includes extensive commentary, a memoir of Pike, information about the Indian tribes he encountered, and maps. Pike first unsuccessfully sought to locate the headwaters of the Mississippi. However, he is better known for his second expedition into what is now the American Southwest, but much of which was Spanish territory at the time. He was not a welcome visitor, but he did bring back much information, and has been memorialized with Pike's Peak, which he never climbed but viewed from a distance. Editor Coues was an important American naturalist, with a specialty in ornithology. Priced at $2,950.

Item 151 is an interesting Mexican-American document: The Present Condition of Mexico. Message from the President of the United States. The year was 1862, which means the President was Abraham Lincoln. The European powers were messing with Mexico, attempting to unseat its reform leader, Benito Juarez. America, thoroughly occupied by its own civil war, was helpless to do much about it. Only a year later, Juarez would be forced into exile by the French, though he would regain power when the French installed government was routed after America's Civil War. Along with reporting on the activities of the European powers, the report also notes activities by the Confederacy in Mexico. $95.

Not all presidents were created equal. For every Lincoln, there was a couple of Coolidges. Item 44 is the November 1927 issue of The Black Hills Engineer. It covers the President's summer trip to the Black Hills and other points in South Dakota, including a visit with the Sioux. Coolidge did not need to be too engaged with his day job at the time. After all, the economy was humming along just fine in 1927. Item 44. $48.50.

Item 10 is an unusual work from Clark's associate Arthur H. Clark Company publications from 1915. It is Frank M. Gregg's The Foundation of a Nation: The story of the pilgrim fathers...as told in the journals of Francis Beaumont. There was no Beaumont on the Mayflower. He was strictly Gregg's alter ego. This is a piece of historical fiction, quite unusual for Clark publications, which are generally nonfiction works. However, Clark notes its uniqueness in the Clark publishing history by another point - it is the only work they ever published relating to New England. $95.

Here is another unusual item: George W. James' The California Birthday Book: Prose and Poetical Selections from the Writings of Living California Authors, with a Biographical Sketch of each. We will update this title to "not living" authors as the book was published in 1909. It contains pages for each day of the year. On the verso is a short poem or words of prose from a California author, with the recto blank except for the date, allowing the owner to add his or her own thoughts. However, the original owner instead had several of these pages signed by the authors of the words on the opposite side. Item 74. $70.