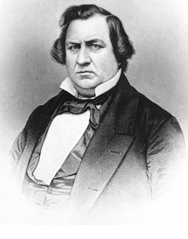 
Item 188 is a none-to-favorable biography of George H. Pendleton, the Copperhead Candidate for Vice-President. His Hostility to the American Republic Illustrated by His Record... Pendleton was a peace Democratic congressman from Ohio when he was tabbed by General George McClellan to run with him against Lincoln in 1864. For a while, they seemed to be headed for victory, but a turnabout in the war effort by the Fall of 1864 enabled Lincoln to be reelected. Pendleton would later be noted for his efforts at civil service reform when he served as a senator in the 1880s (the Pendleton Act is named for him). $100.

Abraham Lincoln is famous for winning the Civil War and freeing the slaves, but few remember him for designing a system of lifting boats so they would not get stuck on sandbars. He was better at some things than others. In 1849, Lincoln applied for, and received, a patent for a system he described as an "improved method of lifting vessels over Shoals." The idea was to have some balloon-like devices which could be filled with air to lift the stranded ship. Lincoln's invention was never put to use, but he apparently is the only President to ever receive a patent. Item 152 is the Report of the Commissioner of Patents, for the Year 1849, which contains the Lincoln patent. $150.