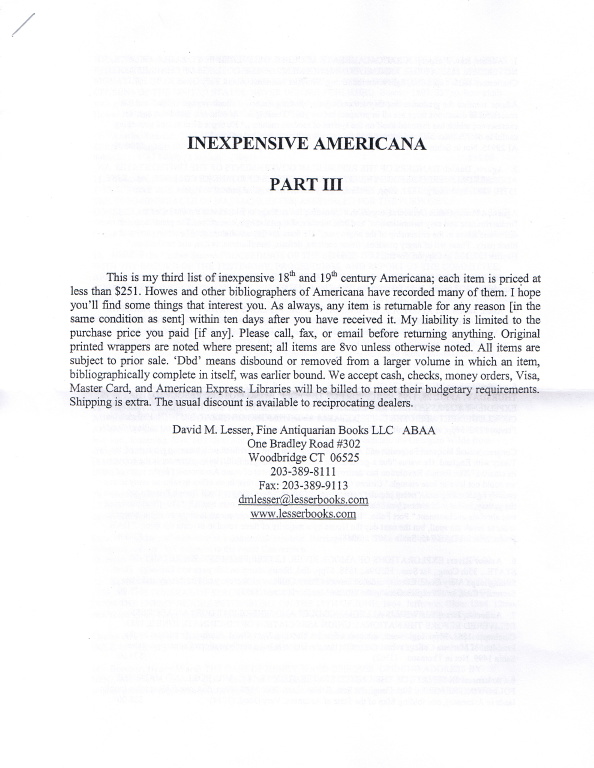 David M. Lesser Fine Antiquarian Books has issued their third catalogue of Inexpensive Americana. Not that Lesser's material is generally very expensive, it's just that nothing in this catalogue of 18th and 19th Americana is priced over $250. Otherwise, this is a typical Lesser catalogue, filled with pamphlets discussing the burning issues of the day. As usual, Lesser gives us a look at America as it once was, and sometimes still is. Here are a few examples.

This is an item filled with irony for the election year of 2008: Dangers of the Republican Governments of the United States, an address given by Daniel Agnew at Roanoke College in Virginia on June 15, 1881. According to Agnew, a Pennsylvania Democrat, the danger of the Republicans is their willingness to extend the right to vote to blacks. What would he think of his party today? Item 2. Priced at $75.

Who could be more forgotten by time than past vice-presidents? The answer is... losing vice-presidential candidates. They certainly are fodder for a catalogue of inexpensive Americana. However, that does not mean they weren't interesting characters in their day. Item 77 is The Charles F. Adams Platform, or a Looking Glass for the Worthies of the Buffalo Convention. Adams was the vice-presidential nominee of the Free Soil Party, a third party headed by former President Martin Van Buren in 1848. They did not seriously contend, but may have drawn off enough Democratic votes to enable Whig Zachary Taylor to win the election. The writer of this pamphlet ridicules Van Buren for changing positions, and mocks Adams as "...cold, selfish, austere and vinegar-like, in the remains of American aristocracy, dying out and tapering off in the third generation." The "third generation" reference pertains to Adams being the son of President John Quincy Adams and grandson of President John Adams. For all the ridicule, Charles Francis Adams would end up serving his country later in a major role. He was U.S. Ambassador to England during the Civil War, and was instrumental in convincing the British not to side with the Confederacy. $250.

Item 131 is The Probable Destiny of Our Country; the Requisites to Fulfill that Destiny; and the Duty of Georgia in the Premises... This was a patriotic address given in 1847 by Georgia attorney Herschel V. Johnson. Johnson spoke of the unique character of American institutions and how they were superior to those of Europe. Unfortunately, those institutions would break down a few years later. Johnson served as Governor of Georgia in the 1850s, and in 1860, he was tapped by Stephen A. Douglas to be the Democratic nominee for vice-president. Douglas hoped the pro-Union southerner Johnson would help him carry the South, and with it the election. Such was not to be, and while Johnson opposed secession at Georgia's secession convention, he was loyal to his home state once the deal was sealed, and became a Confederate senator. It is interesting to note that the forgotten Herschel Johnson would likely be a well-remembered man today if Douglas had won that election. Douglas died just a few months after he would have been sworn into office. Hershel, rather than Andrew Johnson would have been the 17th president. $250.