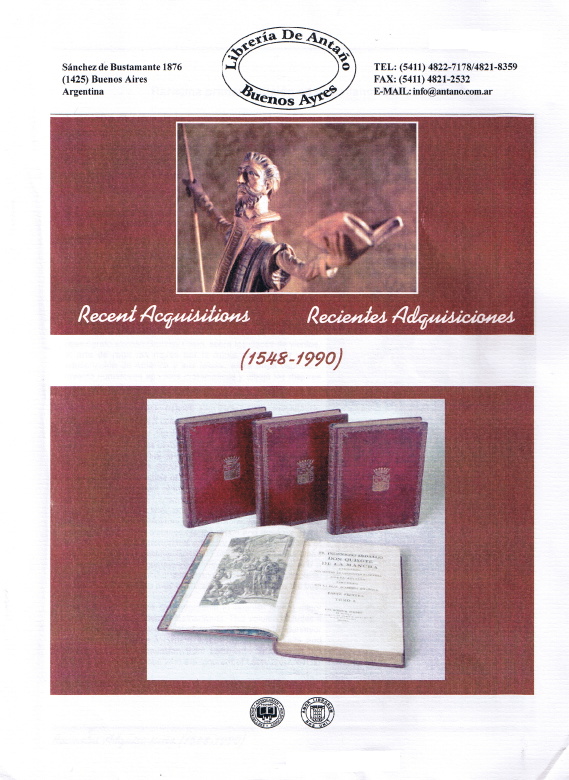 Libreria de Antano has issued a catalogue of Recent Acquisitions (1548-1990). Almost four and one-half centuries can cover a lot of ground, and this catalogue certainly does. The majority of the works offered relate to Latin America, although many are European in origin, and a few relate more to European subjects. Some even discuss issues concerning North America. Libreria de Antano has made it easy for English speakers, though most works were written in Spanish. The catalogue is bilingual, with descriptions in both Spanish and English.

Most of the pre-twentieth century works are more historic in nature, or at least are (or intended to be) nonfiction. We will focus on these works, but note that there is a large selection of literary works from the twentieth century also offered. Here you will find items from notable Latin American writers and poets such as Neruda, Borges, and Garcia Lorca. There are also a few collections of 19th century photography from South America.

We will start with a book in English, though one originally written in Spanish. It is the first English edition of Antonio de Solis' account of the conquest of Mexico: The History of the Conquest of Mexico by the Spaniards. Done into English from the Original Spanish... The first English edition of this work originally published in 1684 was published in 1724. Solis, a former playwright turned government official and historian, used the letters of conquistador Hernan Cortes and others to describe the defeat and capture of the Aztec empire that existed prior to the arrival of the Spanish. It is one of the best sources of information about the Spanish conquering of Mexico, though it is not entirely even-handed. Solis was a great admirer of the brutal Cortes, with much less respect for the natives. Offered is a large-paper copy, one which belonged to original subscriber George Wrighte, a wealthy Englishman. Item 30. $6,750.

Item 34 is Ignacio de Salazar y Olarte's Historia de la Conquista de Mexico... This history of the conquest of Mexico is a continuation of Solis' work, published in 1743. It is even rarer than the first edition of Solis' work. $4,300.

Item 4 is an even earlier account of America's natives: Origin de los Indios de el Nuevo Mundo... by Father Gregorio Garcia, published in 1607. Garcia drew from an unpublished manuscript by Pizarro associate Juan de Betanzos and others in describing the natives at the beginning of the 17th century. However, he was particularly interested in theories as to the origin of these Indians, and he at least had it partly right in theorizing they had descended from Old World tribes, including those of Asia. $47,000.

Item 7 is an extremely rare history of Peru: Historia General de Peru. Author Garcilaso de la Vega was the son of a Spanish captain and Inca princess. At the age of 21, he traveled to Spain, where he studied several European languages and translated European poetry into native language. He met with many of those who had gone to, and participated in the conquering of Peru, from which he gathered information for this book. This work is generally known from its 1617 second printing of the first edition. Offered is a first printing from 1616, of which only one other copy, in the John Carter Brown Library, is known. $29,000.