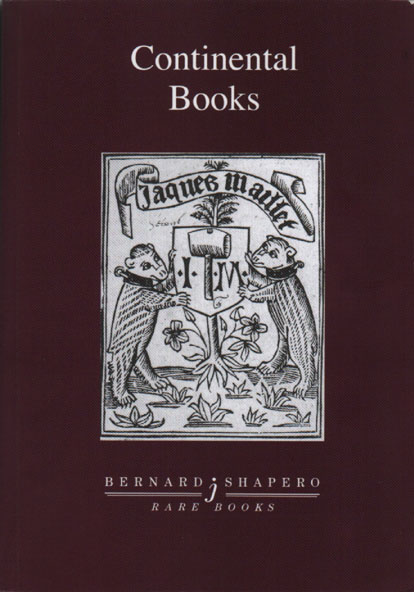 Bernard J. Shapero Rare Books of London has issued a catalogue of “Continental Books.” The “continent” here is, of course, Europe, so that unlike the catalogue, the books themselves are not in English. German, French, Latin and Italian are most likely to be found. Titles are generally from the 16th, 17th, and 18th centuries, and there are sections on scientific works and the Reformation, plus many titles classified as “miscellaneous.” Anyone whose collection focuses on early (but post-incunabula) European works is likely to find this catalogue of great interest.

Item 12, Massanielli seditio Neapolitana by Count Majolino Bisaccioni concerns a revolt in Naples in 1647. Naples was under control of Spain at the time, and provided the Spanish king with a hefty source of income. Heavy taxes, particularly on fruit, led to resentment on the part of the locals. A protest headed by Masaniello, the son of a fisherman, turned into a riot where a mob of angry common people ransacked the city. Mansiello briefly gained concessions from Spanish authorities, but he was assassinated ten days later. By the following year, order, as the Spanish wanted it, was restored. Priced at £280 (British pounds).

The Order of St. Stephen was formed by Cosimo de Medici in 1562 to defend Christendom from the Turks and other enemies. The Order put together a fleet of ships and took part in one of the major victories against the Turks, the 1571 Battle of Lepanto. Item 23 is a 1701 Florence imprint by Fulvio Fantana describing the Order’s naval battles against the Turks and the Barbary pirates. £3,500.

Fencing is an ancient sport that still lives today, even if it doesn’t fill huge stadiums. In 1628, Girard Thibault published what has been described as the greatest work on this sport. It includes numerous illustrations which may make you think twice before taking up this sport. Item 82. £30,000.

It’s hard to find Americana in a catalogue so continental as this, but look hard enough and, voila, there it is. Item 24 is Kleine Schriften meist in der Manier des Zuschauers… Don’t be fooled by the title. This is the life and works of Benjamin Franklin, translated, naturally, into German. It is a first German edition from 1794, priced at £500. Item 59 is from Johann Marquard (or Marquart), Tractatus Politico-Juridicus… This is a 1662 treatise on world commerce, much with America and the colonies. Most of the original documents on which it was based are now lost. £4,500.