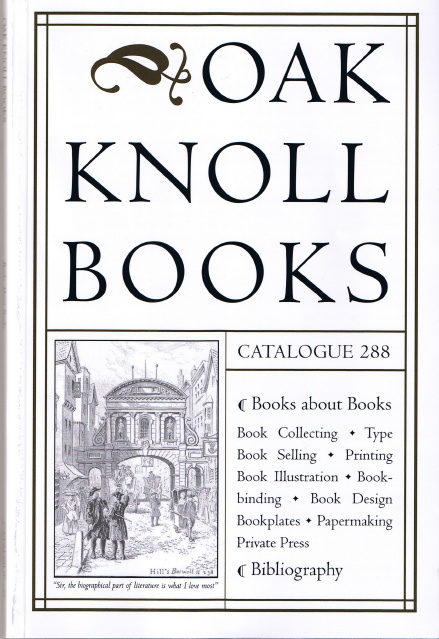 From Oak Knoll Books we have received their latest undertaking in the field of "Books about Books." Catalogue 288 includes over 450 items related to the book arts, printing, collecting, selling, bibliography, and such. There are also items interesting for their non-book arts content, though they may be examples of artistic design or printing. Those of you familiar with Oak Knoll will know what type of material to expect. Here are a few samples of what they have for you this time.

Here is a work that combines artistic etchings and printing with a massive pictorial biography of one of America's greatest heroes - Abraham Lincoln. Bernhardt Wall began his career as a commercial artist and illustrator, designing thousands of comic postcards. However, a trip out west led him to a career of etching more serious subjects - cowboys, Indians, and western scenery. This in turn kindled an interest in history. By 1930, Wall was a respected historian, artist, and now fine printer and binder as well. Wall used his facilities and talents to undertake several projects, none so massive and spectacular as Following Abraham Lincoln 1809-1865. Originally planned as a 15 volume series, it expanded to 60 volumes, and finally to 85. Wall was aware this was not going to be a profitable undertaking, but his printing facilities enabled him to produce this massive series anyway. The 85 volumes include 8-16 plates of Lincoln and his times per volume, with textual explanations. Volume 1 ran off his press in 1931, but it was not until 1942 that the last volume was completed. Supposedly, there were 76 sets, but it seems unlikely that anything like this number of complete sets was produced. Oak Knoll has only been able to locate two other complete copies, and a letter from an early owner of this set indicates it is the only complete one (obviously untrue since at least two others exist, at Harvard and the Lincoln Museum). However, this is set #1. It comes with one of the two ancillary volumes and lots of loose ephemera related to the set and its creator. Item 330. Priced at $19,500.

Writing a book is not easy, what with issues like writer's block and all, but few have it as difficult as did Thomas Doner. Item 97 is his 1878 (probably second edition) book, Eleven Years a Drunkard or the Life of Thomas Doner. Having Lost Both His Arms Through Intemperance, He wrote this Book with his Teeth as a Warning to Others. Try that sometime and you will see it is not easy. Doner was a Civil War veteran, but that was not the source of his affliction. After the war, he worked for the railroad, and evidently after having too much to drink, slipped under a moving a train. That was all he needed to become a crusader against intemperance. $125.

Item 25 is an oxymoron: 47 Unpublished Letters from Marcel Proust to Walter Berry. How can you have a publication of unpublished letters? Walter Van Rensselaer Berry was an American lawyer and diplomat who spent much of his life in France, regularly promoting French causes to Americans and vice versa. He became friendly with a number of writers, and as the number of unpublished letters suggests, a very good friend of Proust. It was published in 1930, after both had died. $350.