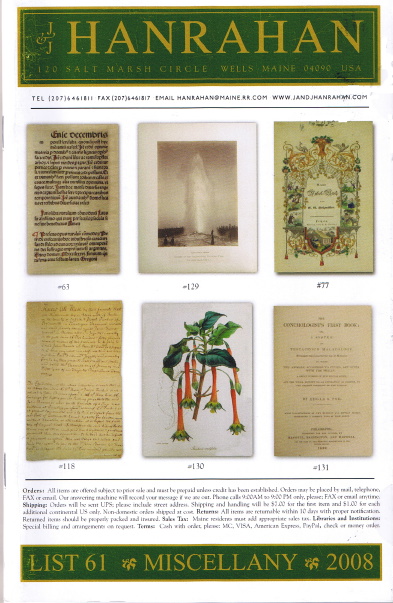 From J & J Hanrahan of Down East Maine we have received their List 61 Miscellany 2008. The Hanrahans describe themselves as "generalists," though we can say that most of what they offer can easily qualify as antiquarian. They do have a few particular areas of focus, such as Colonial America, the Civil War, New Hampshire's White Mountains, and Maurice Sendak (last month we reviewed a catalogue devoted entirely to Sendak), but while these topics are covered this time, so are others too numerous to mention. So, we will just pick a few random samples from what is offered here to describe.

We will start with the oldest book in the catalogue. Like most really old books, it is in Latin: Opus Ruralium Commodorum. Hanrahan describes this 1483 incunable as the "first book on farming." In an era when most books were theological, author Pietro de Crecenzi discusses the management of an estate, based on experiences at his own Villa d'Olmo near Bologna. Hunting, fishing, winemaking and diseases of animals are covered along with advice on the cultivation of various trees and other plants. Item 63. Priced at $12,500.

Item 9 is a sermon from Brookfield, Massachusetts, Pastor Nathan Fiske on then eve of the American Revolution. His December 31, 1775 (published in 1776) sermon is entitled, Remarkable Providences to Be Gratefully Recollected... Fiske relates the history of his town, from its founding in 1660, to its "desolation" during King Philip's War against the Indians in 1675, to its "improvements" up to the current time. However, Fiske also has some strong words for the British, in this period between the Battles of Lexington and Concord and the Declaration of Independence. He asks, "Who are they that with cruel hands, have, the summer past, wantonly made such havoc in our land -- plundered and destroyed so many of our villages, and cast fire into so many of our cities?" The building anger is palpable in the words of this sermon. $750.

Here is a "book" that was undoubtedly the very favorite on some collector's shelf. It is the Histoire de France, an undated book by some unknown author. Actually, it doesn't say much of anything about the history of France, beyond perhaps implying that the French enjoy their drinks. Item 25 is in reality a book safe, one of those "books" that is hollow inside, creating a hiding space among the books on its owner's shelf. However, this one contains not just a hiding space, but a flask as well. One can picture an antiquarian of another day sneaking off to his library, his true intentions concealed from his wife. $250.

Item 102 is a first in the very collectible field of Mormon books, though it is not flattering. It was published in 1831, just a year after the first edition of the Book of Mormon itself. It was written by David Marks, an itinerant preacher not of the Mormon faith. It is The Life of David Marks, to the 26th year of his age. This was the first non-Mormon book to mention anything about the then new religion. Marks implies that Mormon founder Joseph Smith wrote the Book of Mormon, rather than receiving it from the Angel Moroni, by saying he first copyrighted it in his own name. However, despite skepticism bordering on contempt, Marks did meet with some of the earliest Mormons, and his writing does provide some insight into the beliefs of the earliest followers of the faith. $1,250.