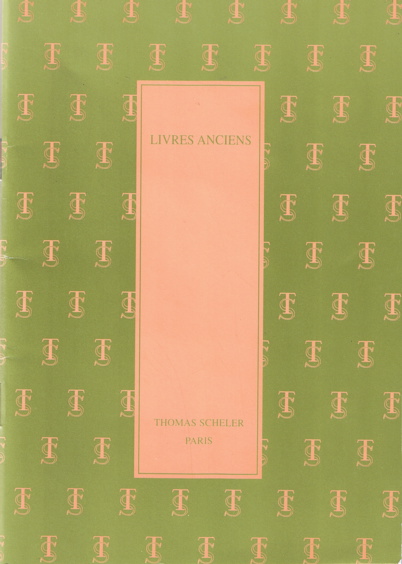 Librairie Thomas-Scheler of Paris has issued their 36th catalogue of Livres Anciens (antiquarian books). This catalogue is written in the French language, as are most of the books within. We did find two items in English, and some Latin and German, but this is primarily suited to collectors familiar with French. However, those who seek Americana will find several items pertaining to their interests from the time when France held colonies in the western hemisphere. Here are a few samples from the newest catalogue published by Librairie Thomas-Scheler.

Item 70 is a first edition of what could be described as the birth of psychoanalysis. Published in 1895 by Sigmund Freud and Joseph Breuer, it is Studien uber Hysterie (studies of hysteria). Freud and Breuer were studying patients suffering from hysteria. Breuer had been focused on hypnotism, while Freud was discovering that he could provide his patients with temporary relief by encouraging them to talk about their problems. This would lead to his technique of "free association," and all of the subconscious thoughts Freud believed he was able to elicit from his patients. Priced at €7,500 (euros, or approximately $11,105 in U.S. dollars).

Item 36 is an important work describing French laws in their American colonies in the early 18th century. Among those covered are laws which regulated the slave trade. The title is Le Commerce de l'Amerique par Marseille, by M. Chambon. The laws were dated 1719, though the two-volume set was published in 1764. €8,500 (US $12,586).

Paul Bert was a 19th century French scientist who conducted pioneering studies on the effects of low and high air pressure on humans and other animals. Among his discoveries was that altitude sickness was not caused by overall reduced air pressure, but by reduced oxygen pressure. His discoveries were presented in his 1878 book, La Pression barometrique. Recherches de physiologie experimentale. Item 18. €1,500 (US $2,220).

Jean-Baptiste Lamarck is primarily remembered for developing one of the early evolutionary theories, over half a century before Darwin. By 1800, he was propounding controversial theories about how organisms change over time. However, he believed there were forces pushing organisms to evolve, rather than the random changes of natural selection. Lamarck believed there was a force that led organisms to become more complex as time went by. Additionally, he believed that organisms could pass on adaptations they had learned to their offspring. Systeme analytique des connaissances positives de l'homme... is perhaps the greatest of his later works, where Lamarck delves more deeply into issues involving the central nervous system as well as issues of thought. Thomas-Scheler notes that, as with his earlier works, Lamarck received little respect or recognition for his revolutionary ideas, and as a result, this book is quite rare. Item 94. €4,000 (US $5,917).

This is not a pleasant subject to discuss, but a medically necessary one, especially in the 18th century when constant wars between the major powers left so many soldiers physically battered. Item 177 is De l'amputation a Lambeau, ou nouvelle methode d'amputer les membres, by Pierre Verduin. This book discusses the history and description of the latest technique in performing the amputation of limbs. Surely such a procedure must have been horrible at the time - 1756 - but the Lambeau procedure apparently reduced the amount of bleeding and risk of death that went with it. €650 (US $962).

Here is a voyage offered in the English language: A Missionary Voyage to the southern Pacific Ocean, performed in the years 1796, 1797, 1798, in the Ship Duff, commanded by Captain James Wilson (edited by Thomas Haweis). This was a missionary voyage sponsored by the London Missionary Society. The Society purchased the ship Duff, while Captain Wilson volunteered to take the missionaries to Tahiti and various South Sea islands. Suspicious natives did not always greet the newcomers with open arms, and many quickly retreated to England or Australia. Nevertheless, the Society was persistent in following up its calling (a later voyage by the Duff was intercepted by pirates). Item 182 is the preferred Gosnell printing of two simultaneously issued editions of 1799 of this account of the Duff's first journey. €3,500 (US $5,180).