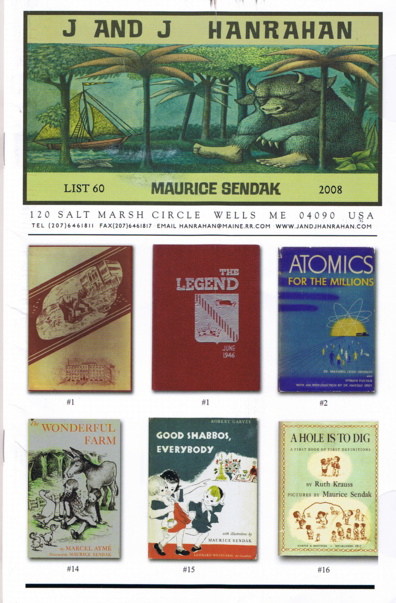 The latest catalogue from J and J Hanrahan features items from Joyce Hanrahan's Maurice Sendak collection. The official title is Maurice Sendak. The First Twenty-Five Years. Sendak is still going strong today, though his first 25 years ended 37 years ago. However, it was during those first 25 years that he emerged from an artistically gifted but unknown high school student to the internationally recognized illustrator and writer of children's books.

A great many of these books are first editions, others are first editions in different languages, some are signed or include original Sendak drawings. Joyce Hanrahan has put together an extensive collection of Sendak's work, and now others who appreciate his creations have an opportunity to pick up some of his items that can be difficult to find.

The catalogue begins all the way back at high school, when Sendak was called on to provide illustrations for his high school yearbook. That yearbook is The Legend. June 1946. It was issued by Lafayette High School in Brooklyn, and Sendak was a senior that year. Along with providing artwork, Sendak was the Art Editor for the yearbook. Under his photograph, there is a prophetic verse: "You're delightful drawings make us all gay. A famous artist you'll be someday." As a caution, this is an imperfect copy with a couple of pages of the faculty section missing, but most of Sendak's artwork has survived. Item 1. Priced at $800.

It was during high school that Sendak landed his first true book-illustrating job. This was the dawn of the atomic age, and Maxwell Leigh Eidinoff and Sendak's high school physics teacher, Hyman Ruchlis, were preparing a book to explain this wondrous/terrifying new technology to the people. This is not a "children's book" in the typical Sendak sense of the words, though the book and his illustrations were designed to explain these scientific developments to the young. Offered is this first Sendak illustrated book, Atomics for the Millions, published in 1947. Item 2 is a first edition, first issue. Priced at $700. Evidently this book was of interest well beyond America's shores, as Hanrahan also offers editions in Japanese, Danish, French, German, Italian, Spanish, Swedish, and British. Okay, that last one is not a different language, but is a first British edition.

The Wonderful Farm, by Marcel Ayme, was the first true children's book Sendak illustrated. Sendak has noted that it was the book that "officially" made him someone in the children's book field. Item 14 is a first edition from 1951. $550.

You undoubtedly think of Sendak as an illustrator of books, but here is an unusual adaptation of his artistic talents: Cynthia Gooding Sings Turkish and Spanish Folk Songs. No, Sendak didn't join her for harmonies, but he did provide artwork for the album cover. It depicts Spaniards and Turks singing together, which was nice to see after centuries of fighting each other. The album was released in 1953. Gooding made several folk albums and did a radio show in New York in the 1960s where she once interviewed a 20-year-old unknown singer named Bob Dylan. Sendak was just thankful to get a paid illustrating job at the time. Item 28 includes both Sendak's cover and Gooding's vinyl music. $200.