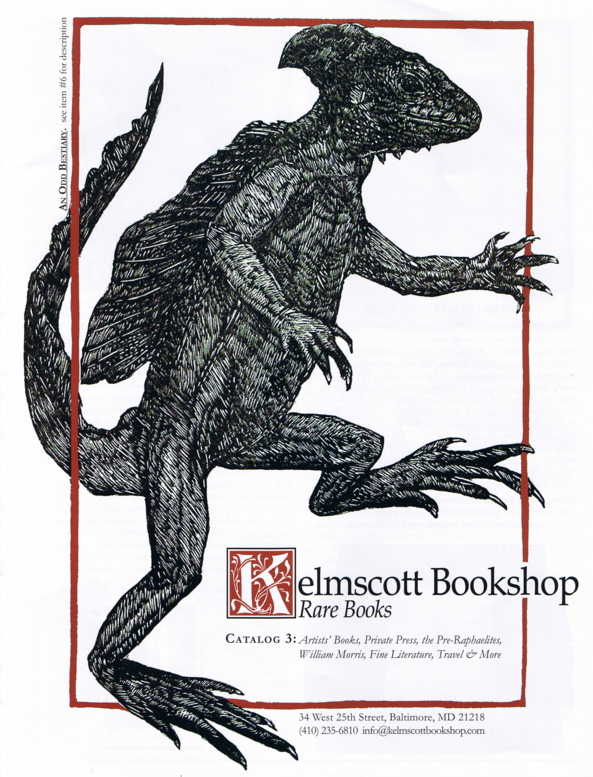 This month we review our first catalogue from Kelmscott Bookshop Rare Books of Baltimore. This is their Catalog 3: Artists' Books, Private Press, the Pre-Raphaelites, William Morris, Fine Literature, Travel and More. Certainly we should not be surprised to see items relating to Morris in this catalogue, as he lived in Kelmscott Manor in Kelmscott, UK, and founded the Kelmscott Press. However, you will find many other fine and limited editions, artistic works, and more of notable interest to those fascinated by the book arts. Here are a few of the items waiting within the pages of this Kelmscott catalogue.

That terrifying creature on the cover (click the thumbnail image to view) comes from An Odd Bestiary, or, a Compendium of Instructive and Entertaining Descriptions of Animals, Culled from Five Centuries of Travelers' Accounts, Natural Histories, Zoologies, &c. By Authors Famous and Obscure, Arranged as an Abecedary. I must admit, I was not familiar with the term "abecedary," so if you share my ignorance, it's an alphabet or "ABC" book. This is a very special alphabet book, created by artist and printer Alan James Robinson of the Cheloniidae Press (later the Press of the Sea Turtle). The letters of the alphabet are accompanied by wood engravings of various members of the animal kingdom, ranging from aardvarks to zebras. Amusing text, taken from fact and fiction, to go with the images has been provided by Laurie Block. Initial letters have been hand-colored in red. Item 6 is one of 50 deluxe numbered copies of this 1982 book. Additionally, there are loose copies of the 26 engravings included, each signed and numbered by Robinson. Priced at $2,500.

From an alphabet book we go to an "alpha-bat" one. Item 4 is JoAnna Poehlmann's Alpha-Bats, published in 2005. This is an alphabet book which features images of bats, taken from paintings, postage stamps, woodcuts and more. Among the artists featured are Beatrix Potter, Max Ernst, Hans Holbein, and Leonard Baskin. Dates range from a 1522 Albrecht Durer scientific illustration to a 2004 hand-sewn toaster cover. This is number 4 of 25 copies signed and numbered by the artist. $875.

Item 38 is one of those books from Morris' Kelmscott Press. Published for Bernard Quaritch in 1892, the original was much, much older. It was taken from the 1481 Caxton edition of Reynard the Fox, though the story itself goes back well before even that. This work features ornate woodcut ornamental borders and initials throughout the text. $3,200.

Item 79 is the February 1892 issue of The Novel Review with which is incorporated Tinsley's Magazine. The Review/Tinsley's was published in London from 1867-1892, providing reviews of new fiction. This issue contains a review by a young George Bernard Shaw of his first books. He explains he is reviewing his own books because of "the extreme difficulty of finding anyone else who has read them." $225.