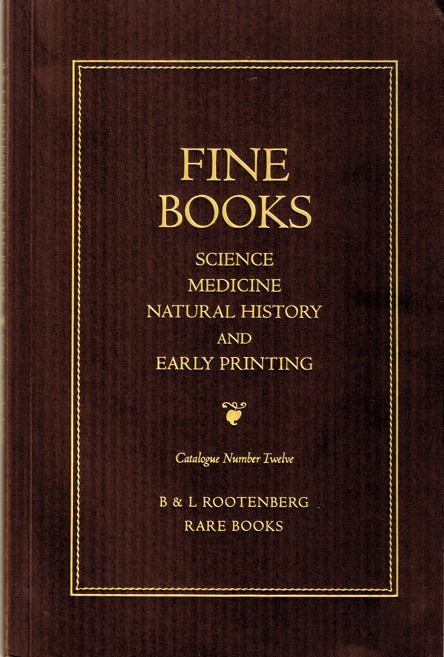 This month we have received our first catalogue from B & L Rootenberg Rare Books of Sherman Oaks, California. This is Catalogue 12 for the Los Angeles area bookseller that has been in business since 1970. Its title, which corresponds with the fields in which Rootenberg specializes, is Fine Books. Science, Medicine, Natural History, and Early Printing. It is filled with early publications on the scientific discoveries of the time (which could be anywhere from the 16th to 20th centuries), some pseudo-science, medicine, both good and bad, and other historic works. This is an outstanding collection for those who collect in the history of the sciences. Here are a few of the items being offered.

Item 27 is a pair of major pre-Darwin works on evolution: Vestiges of the Natural History of Creation (1844) and Explanations: A Sequel to "Vestiges of the Natural History of Creation." (1845). These anonymously published books were the work of Robert Chambers. Chambers did not quite get the mechanisms of evolution right. He envisioned sudden development of new species in accordance with natural laws rather than slow evolution through natural selection. To Darwin, Chambers theories were both sloppy and groundbreaking. To religious authorities, they were heresy (hence the anonymous publication - the author's name was not revealed until after Chambers' death). Still, while Chambers did not understand how the process worked, his conclusion that the geologic record revealed something more than sudden creation with no further changes in species, was revolutionary for its time, and threatening to many. Priced at $6,500.

Fifteen years later, Charles Darwin would publish a more coherent theory of evolution in On the Origin of Species by Means of Natural Selection... Rather than presenting just an intellectual theory, Darwin backed his beliefs with evidence. Rootenberg describes it as "the most important biological book ever written," though many still refuse to accept his basic conclusions. Offered is a first edition, first issue, published in 1859. Item 32. $95,000.

For those unwilling to accept Darwin, there is the ultimate works of creationism, Annales veteris testamenti (1650) and Annales in quibus... (1654) by Archbishop Ussher. Ussher was the man who undertook a detailed study of times in the Bible, compared them to the known date of the death of Nebuchadnezzar, and calculated the exact dates of biblical events. Most important, of course, was the date of creation, which Ussher calculated to be October 23, 4004 B.C. Adam and Eve were driven from the Garden on Monday, November 10 of that year. The Ark touched down on Mount Ararat on Wednesday, May 5, 2348 B.C. However, Ussher's calculations did not resolve all issues even for those who believe in creationism. His 6,000-year timeline leaves little opportunity for any of the geologic or evolutionary changes seen in the fossil record. Some creationists believe that the days of Genesis are longer than what we currently perceive to be a day, with man being a special creation coming after many years of prehistory of the Earth. That explanation of fossils is not allowed for in Ussher's a-day-is-a-day calculations. Item 117. $6,500.