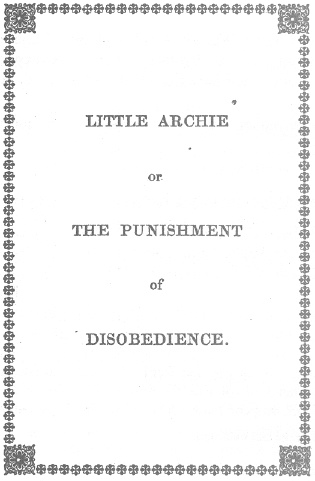 
Dibdin's first book was the self-published Poems, printed in 1797. It was not his favorite work. He would later write, "I struck off 500 copies, and was glad to get rid of half of them as waste paper; the remaining half have been partly destroyed by my own hands... My one consolation is that the volume is now exceedingly rare." In other words, this is a book for collecting, not reading. £750 (US $1,485).

Every now and again you get a chance to own a one-of-a-kind book, and item 172 would appear to be that. The title is Little Archie or the Punishment of Disobedience. It is only through a note written on the front endpaper that its story can be known. It was evidently printed in the home of Nathaniel Brown Engleheart in 1864. However, the author was Frederick Mares Godden, and he wrote this tale for his young son, William Jefferys Goddin. It is the story of a little boy who was stolen by gypsies (in those days, it was not uncommon to believe that gypsies stole children, and this fear was employed to teach moral lessons). This copy is inscribed by father to son, and the lack of any copies elsewhere leads Forest to conclude that this was probably the only copy printed. Not much is readily obtainable about the Goddens, but the front notation comes from Sir George Bull MP, and he notes that his father, William Bull, knew the author's son who was given this book. £445 (US $881).