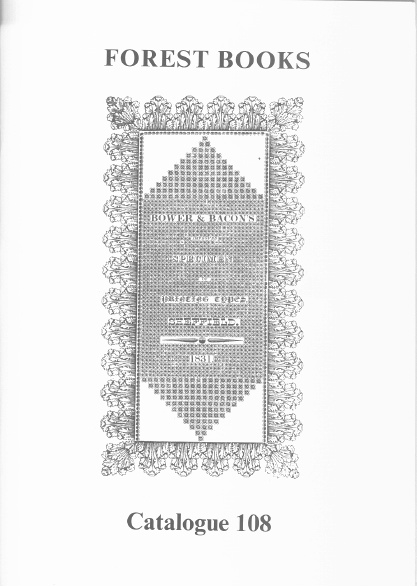 Forest Books of the UK is now offering their Catalogue 108 of Bibliography, Bookbinding and Reference. This is a catalogue full of titles for those who want to learn more about books, whether it be the book arts, contents, or other information. Of particular note is the large number of catalogues of book collections going back to the 18th and 19th centuries. Many of the great collections only were catalogued at the very end - when the collections were put up for sale at auction. The result is the auction catalogue is the only source to know what these wonderful, though long ago dispersed, libraries once held. However, auction listings is just one type of the many books offered herein. Here are some examples of what you will find.

Item 180 is the catalogue of a spectacular 19th century collection: Bibliotheca Grenvilliana; or Bibliographical Notices of Rare and Curious Books, Forming Part of the Library of the Right Hon. Thomas Grenville: by John Thomas Payne and Henry Foss. Published in four volumes between 1842 and 1872, it accounts for part of the enormous library Grenville put together. Grenville was the son and brother of British Prime Ministers, and served 30 years in Parliament himself. However, he became most noted for his career in retirement - bibliophile. He amassed a collection notable both for quantity and quality, and being a very generous man, was known to allow just about anyone with a serious purpose access to it. Finally, he gave the 20,000 volumes he had collected to the British Museum, the largest gift of books the museum has ever received. Interestingly, among the many fields Grenville collected was Americana, and Forest notes, "he was the first collector to buy Columbus and Vespucci letters." Priced at £2,745 (US equivalent of approximately $5,403).

Item 22 is a catalogue of another collection of 20,000 volumes, but this story has a less happy ending. It is The Valuable Library of Books, in Fonthill Abbey. This was for an auction that ran for many days in 1823. Fonthill Abbey was the home of William Beckford, a several times Member of Parliament who inherited an enormous fortune from his father of the same name, a one-time Mayor of London. The younger Beckford did little to the fortune he inherited other than dissipate it. He built a monumental, gothic castle on land he inherited which he named "Fonthill Abbey." He then proceeded to buy books, including complete collections, to fill it. After almost 20 years in construction, the mansion was completed in 1813. By 1822, much of his money gone, Beckford was forced to sell the Abbey and its book collection. He sold it to John Farquhar, who had little interest in Beckford's books, so the following year, Farquhar put them up for auction, hence this catalogue. In fairness to the eccentric Beckford, it should be noted that he was also an author, and his work of Gothic fiction, Vathek, is well regarded. £645 (US $1,270).

He was probably the greatest bibliophile ever, along with having one of the strangest middle names. Thomas Frognall Dibdin wrote a series of books in the first half of the 20th century on the joys (actually obsessions) of book collecting. Books such as Bibliomania and The Library Companion tout the wonders of book collecting, while his later Bibliophobia attacked the decline in book prices that occurred in the later years of his life. Item 117 is Dibdin's major undertaking, The Bibliographical Decameron, the cost of production for which forced him to auction his personal library. Dibdin assured the long-term value of this limited run book by publicly destroying the plates a short time after it was printed. Published in 1817. £895 (US $1,772).