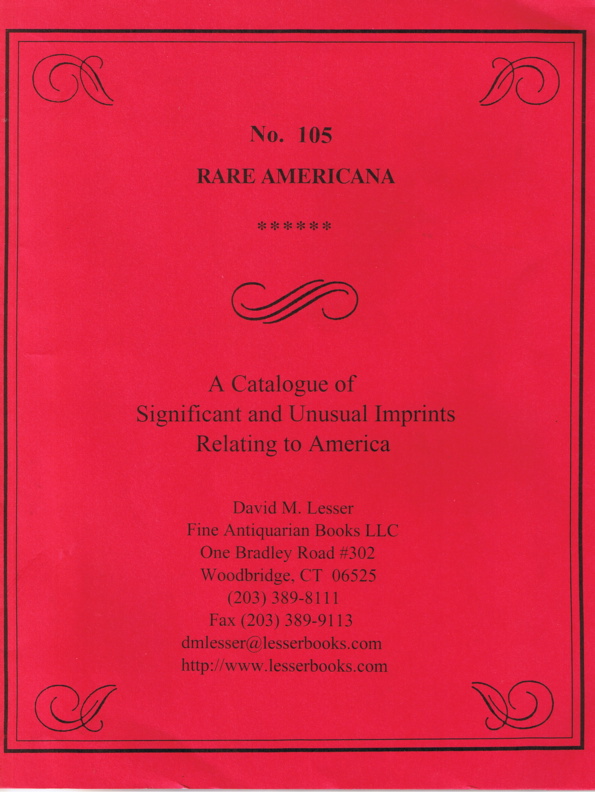 David M. Lesser Fine Antiquarian Books has a new catalogue of Rare Americana available. The latest is number 105, and the format is not unusual, though the items offered are. Lesser specializes in primarily 18th and 19th century Americana, mostly pamphlets and other uncommon items. It is filled with discussions of the issues of the day, including lots of debates. The arguments may have involved politics or theology, or disputes that landed in court. Whatever the type, Americans then, as now, tended to argue with each other a lot. Why can't we just get along?

Item 122 is a very interesting and unusual piece of colonial Americana, though it was published in London in 1766. The anonymous writer, who said he had just returned after residing for several years in America, attacks the hated Stamp Act. This act placed a tax on internal transactions in the colonies, rather than just those involving international trade. The tax on internal transactions incensed the colonists. The British argued that such a tax was justified by the cost of defending the colonies, primarily from the French and their Indian allies. The French and Indian War had gone on for almost a decade before finally concluded in 1763. This author looks at the situation from a completely different point of view. He states that the Colonists left the safety of England, "and at the expence of their own money and blood, subdued the natives, and converted a wilderness into a fruitful country, which is now a valuable part of the British empire." They created "a vast addition of empire to the kingdom, whose subjects they are." He further notes that their young men had paid a heavy price to defend England's colony. It is wrong for England, having received such benefits, to demand that the colonists pay for an unwanted standing British army. While the British were soon forced to repeal the Stamp Act, their attitudes toward the colonists did not change, and a decade later, we all know what happened. This piece is entitled The Necessity of Repealing the American Stamp-Act Demonstrated... Priced at $1,750.

Here is one of the more novel arguments employed by defense attorneys, perhaps an indication of just how bad they considered their case. Item 27 is the Trials of the Mail Robbers, Hare, Alexander and Hare, published in 1818. The attitude toward robbing the mail was a bit more severe in 1818. The punishment was death. Out of what can only be thought of as desperation, the defense refused to plead - neither guilty nor not guilty. They claimed that since there was no statute for applying the death penalty to someone who failed to plead, the defendants could not be executed. The prosecution countered that their silence was in effect a confession and guilty plea, so there was no need to even have a trial. The Court, displaying some common sense, rejected both arguments and treated the defendants' silence as a not guilty plea. The case proceeded, Joseph Hare and John Alexander were convicted, and in due course executed. $950.

If you think questions of what is the proper balance of power between America's executive and congressional branches is a recent development, item 71 reminds us that this dispute goes back almost to the nation's beginning. In 1795, Congressman and future President James Madison, "the Father of the Constitution," was already concerned that the executive was overreaching. Alexander Hamilton's federalism, and his tilt toward Britain in its disputes with France, was of great concern to people like Madison and Jefferson, who opposed growing federal power. However, it was Hamilton who had President Washington's ear, and Madison had to deal with the issue of opposing views that had the support of a man admired by the overwhelming majority of Americans. In his Political Observations, Madison states, "The separation of the power of raising armies, from the power of commanding them, is intended to prevent the raising of armies for the sake of commanding them." Dealing with the Washington issue, Madison goes on to say that these constitutional issues cannot be ignored "by appealing to the virtues of the present chief magistrate, and to the confidence justly placed in them." It is necessary to "distinguish between the respect due to the man, and the functions belonging to the office." $2,500.