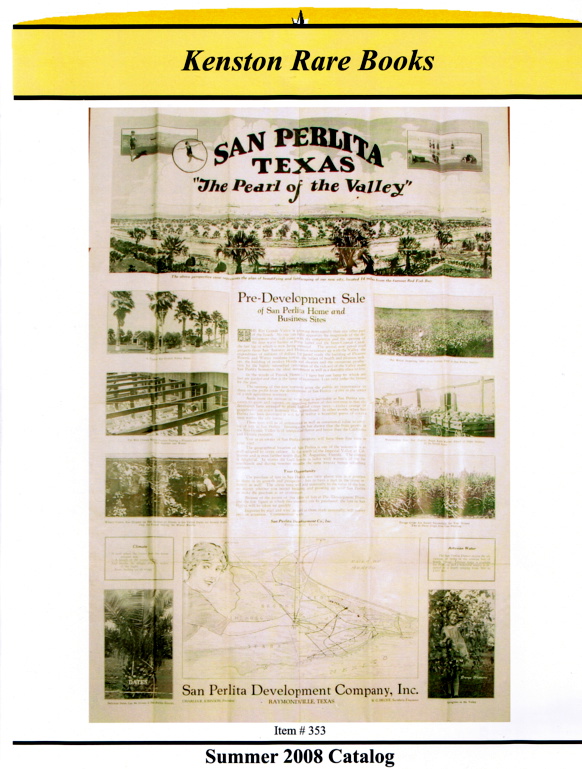 Books from Texas and the West from Kenston Rare Books.

Kenston Rare Books of Dallas recently issued their Summer 2008 Catalog. Kenston's specialty is Fine Books on Texas and the American West. That is a concise description of the 400+ items you will find in this catalogue. The topics covered are what you would expect from this region: cowboys and cattle, ranches, gunslingers and lawmen, and life on the frontier. While there are titles from all over the West, the concentration is definitely on Texas, and so there are books pertaining to its distinctive history, notably the Texas Revolution, and many histories and guides for specific towns and counties in the Lone Star State. This catalogue is filled with interesting reading and many collectors' items. Here is a look inside.

To be contrary, we'll start with a last. Bill Carlisle was the last of the lone train robbers. He favored (or disliked, depending on how you look at it) the Union Pacific. A Wyoming boy, he began jumping trains in the Cowboy State. He would go down the aisles, demanding money from the passengers, and leap away into the brush, where he was hard to find. He worked his trade successfully several times before one of his leaps led to a sprained ankle. The posse was able catch up. He was tried, convicted, and imprisoned. Bill promptly escaped, and went back to his business. However, in his next attempt, he encountered some soldiers (this was during World War I) and in a scuffle, Bill was shot in the hand. He still jumped, but was soon surrounded. He planned to fight to the death, but Bill was not a killer, so instead he returned to prison. During the 20 years he had to reconsider the path he had chosen, Bill changed his ways, and eventually ended up running a gas station and motel in the western Wyoming town of Kemmerer. Item 74 is his story, Bill Carlisle: Lone Bandit: An Autobiography, published in 1953. Priced at $45.

Andrew L. George was another man who knew prison life from the inside, and he wrote about it in A Texas Prisoner: Sketches of the Penitentiary, Convict Farms and Railroads Together with Poems and Illustrations. The author mentions John Wesley Hardin, Texas' most notorious outlaw, who served time with him. George was convicted of murder in 1884 and sentenced to be hanged. Fortunately, that sentence was commuted by the Governor to life. In a problem that plagues Texas justice still today, they got the wrong man. George was fully pardoned when the actual killer confessed in prison. He hoped that his description of conditions on the inside would discourage others from behaving in ways that would land them behind the gate. Item 150, published in 1895. $450.

7 Years in Texas Prisons is another horror story of Texas prison life. Author Beacher Deason was not so innocent. He was convicted five times for burglary, forgery, theft and bootlegging. He describes work gangs, bad food, inmates being killed by guards, and other pleasantries of prison life. Along the way, he got religion and wrote this book to save others from his fate. The book is undated, but the price tag of 15 cents indicates it is not recent. Item 107. $85.

Amos A. Parker visited Texas at a critical juncture in its history, and at a time when very little was being written about the land, especially in English. Parker had made the long journey from New England across the Great Lakes and down the Mississippi, finally arriving in Texas in the days before the revolution, when it was still indisputably Mexican territory. He describes the settlements and people, physical aspects of the land, and writes about the cultural conflicts between Mexico and the settlers. Not long after his visit, Texas would be engulfed in full-scale revolt. Parker's book, A Trip to the West and Texas, was published in 1835. Item 281. $750.