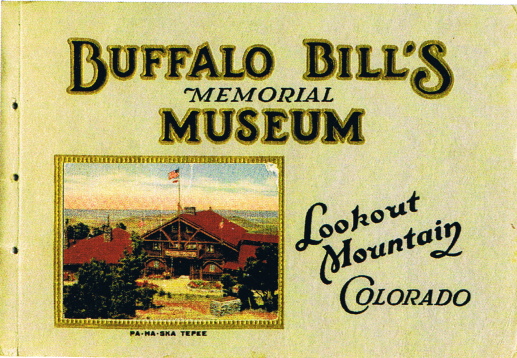 
Item 65 is a circa 1925 pamphlet for Buffalo Bill's Memorial Museum, Lookout Mountain, Colorado. William Cody built his reputation as the quintessential westerner, prospecting for gold (unsuccessfully), riding for the Pony Express, herding cattle, driving covered wagons, and serving as an army scout and hunter (hence the name "Buffalo" Bill). However, he retired from these activities at an early age to become a showman, displaying a somewhat exaggerated version of the Old West to audiences around the world. Beginning in 1872, Bill continued to perform until his death in 1917, though during the later years he was spurred on by debts more than love of performing. At the age of 70, riding and roping are not that easy any more. In 1921, Buffalo Bill's unofficial foster son, Johnny Baker, opened this memorial museum. Bill is buried here. The museum is still in operation today and remains a very popular tourist site, though it is now run by the Denver Parks Department. $85.