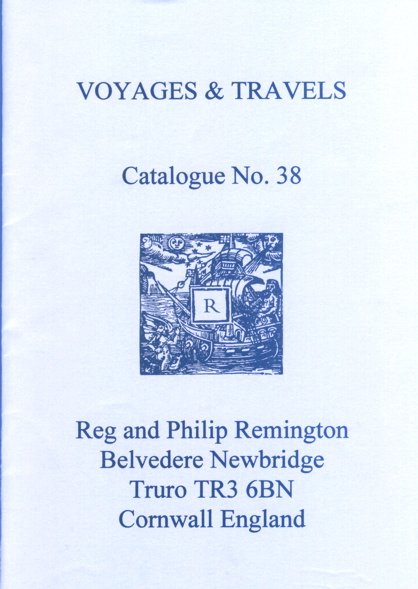 A new catalogue was recently issued by Reg and Philip Remington, of Truro, the UK. Its title is Voyages & Travels Catalogue No. 38. This catalogue includes primarily 17th and 18th century voyages (most trips were voyages as they went by sea), and also numerous books on the lands visited. Many of these works are natural histories of these lands rather than accounts of trips. Additionally, there are books not so much about travel as about topics related to it, such as the slave trade. Anyone interested in exploration and discovery from a time when much of the world was still new to Europeans will find this catalogue most intriguing. These are a few of the works being offered.

John Byron was hardly of age when he set off on George Anson's 1740 trip around the world. They were supposed to harass Spanish shipping along the coast of South America, some privateering for profit. However, the voyage turned into a terrible disaster. Five of Anson's six ships were either shipwrecked or forced to return, and most of his sailors died. Eventually, Anson completed the circumnavigation in his last boat, captured a treasure-laden ship near the end, and achieved great wealth. Byron was not so lucky, though more fortunate than most as he survived. His ship, the Wager, was wrecked off the coast of Patagonia. The survivors split into two groups. Byron's group finally made its way to Rio, after being imprisoned by the Spanish, and eventually made it back to England six years later. You can read this harrowing tale in The Narrative of The Honourable John Byron ...Containing an Account of the Great Distresses Suffered by Himself and His Companions on the Coast of Patagonia... Item 6, published in 1768. Priced at £950 (roughly $1,884 in US dollars).

Byron would be placed in command of his own expedition in 1764. It did not make many notable discoveries, but did set a speed record, circumnavigating the globe in just 22 months, a record at the time. Six years before the publication of the official account, an unofficial version was published: A Voyage Round the World, in His Majesty's Ship the Dolphin, Commanded by Commodore Byron. The unnamed author is believed to be Charles Clerke, who later sailed on all three of Cook's expeditions. Clerke briefly took over the final Cook expedition when the latter was killed by natives in Hawaii, but he was already very ill and did not survive long enough to make it home. In this book about the Byron voyage, Clerke (or whoever) reinforced the old legend about the Patagonian giants, first reported by Magellan's expedition. They had shrunk from earlier claims of twelve feet to nine, but that was still spectacular enough for this book to arouse quite a stir. However, the later official account reduced them to 6 1/2 feet, and the reality was about 6 feet, quite tall for the era, but hardly giants. Item 8. £1,800 (US $3,570).

Items 35 and 36 pertain to regulating the British slave trade in the late 18th century. The first is An Act for Regulating...the Shipping and Carrying of Slaves in British Vessels, published in 1798. It limits the number of slaves to be carried on a vessel, requires the keeping of a journal, and that a surgeon be present on each voyage, etc. Requirements concerning food and pay for the crew are also promulgated. £450 (US $892). The second is An Act for Better Regulating the Manner of Carrying Slaves, in British Vessels, from 1799. Among the requirements are letters, painted in white or yellow on the stern, at least four inches tall, saying 'Allowed to Carry Slaves' and the number of them on board. Parliament outlawed the British slave trade in 1807, though it was another 26 years before slavery itself was outlawed in all British territories. £350 (US $694).