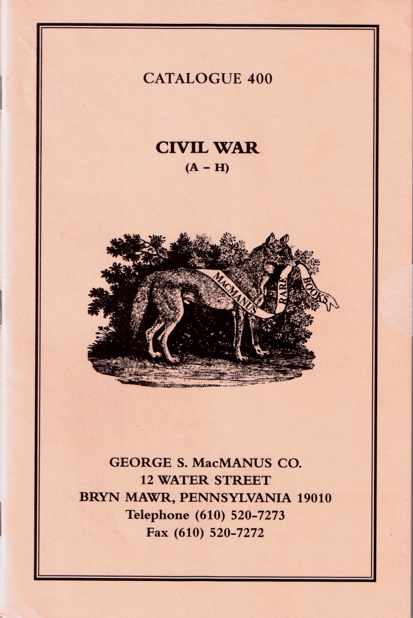 The George S. MacManus Co. has issued a new catalogue on the Civil War. This is Catalogue 400 for the venerable Philadelphia area bookseller, and the first in a series. This one covers the letters A-H. Considering it offers 569 items, we can expect a lot of books will be covered before the series completes. You will find books about the major names of this momentous conflict, Lincoln, Grant, Lee, Davis. You will also discover the stories of many enlisted men, the obscure foot soldiers who bore the heaviest of burdens, and retold their experiences years later. Whatever aspects of the War Between the States or The War of the Rebellion, however you wish to describe it, you collect, you are sure to find many items of great interest. Here are a few.

Item 283 is a biography of the leader of the southern states: Jefferson Davis. Ex-President of the Confederate States of America. A Memoir. By His Wife. Davis was a successful Mississippi politician, having served as a U.S. Congressman, Senator, and Secretary of War. Despite his eventual role, he was a reluctant secessionist, fearing the South would be overpowered by Union forces. Nevertheless, when Mississippi seceded, he resigned from the Senate and joined the cause. While he might have been reluctant to support secession, he believed the states had a constitutional right to secede, a view he would stick to for the remainder of his life. After the Confederacy fell, Davis spent two years in prison awaiting trial, but he was released and never tried. From then on he lived life as a respected citizen, though he was not allowed to serve again in the senate despite his election. Davis died in 1889, and his wife Varina published this book the following year. Like her husband, she remained loyal to the cause long after it was lost, and loyal to her husband always. Priced at $200.

Varina Davis would undoubtedly have considered comparisons to her husband a compliment, but the writer of this 1864 broadside had no such intent: What Jeff. Davis Thinks of the War. It was published in response to the Democratic convention of 1864, and it notes that, sharing the views of Davis, "The main plank of the Chicago Platform is that it pronounces the war a FAILURE, and on that account demands that 'IMMEDIATE EFFORTS BE MADE FOR A CESSATION OF HOSTILTIES.'" The proper response to this Davisian position, the broadside announces, is to "VOTE FOR LINCOLN." The slow progress for the Union in the war by the summer of 1864 was a serious threat to Lincoln's reelection, and the idea of suing for peace was gaining support in the North. However, by election time, the tide was turning and Lincoln was swept back in office. Item 116. $1,000.

Item 313 is a document that marks the beginning of secession. It is a Report on the Address of a Portion of the Members of the General Assembly of Georgia. It is dated December 22, 1860, and is signed in type by W.F. De Saussure, a delegate to the South Carolina secessionist convention. Georgia had asked South Carolina to refrain from any separate action, but the South Carolinians had voted to secede anyway. This report explains why they chose to so act. De Saussure claims, "South Carolina did not desire to take the lead in secession," but had no choice after "the election of an enemy to Southern institutions [Lincoln], elected by Abolition states upon Abolition issues." He goes on to say that such a convention would have but two choices, "patch up a hollow truce with anti-slavery, which denounces our Institution as a crime, and which will hold all the power of the Government in all its departments in all time to come; the other to concert measures for final separation, and for the formation of a Southern Confederacy." Put that way, what point is there for further discussion? $950.