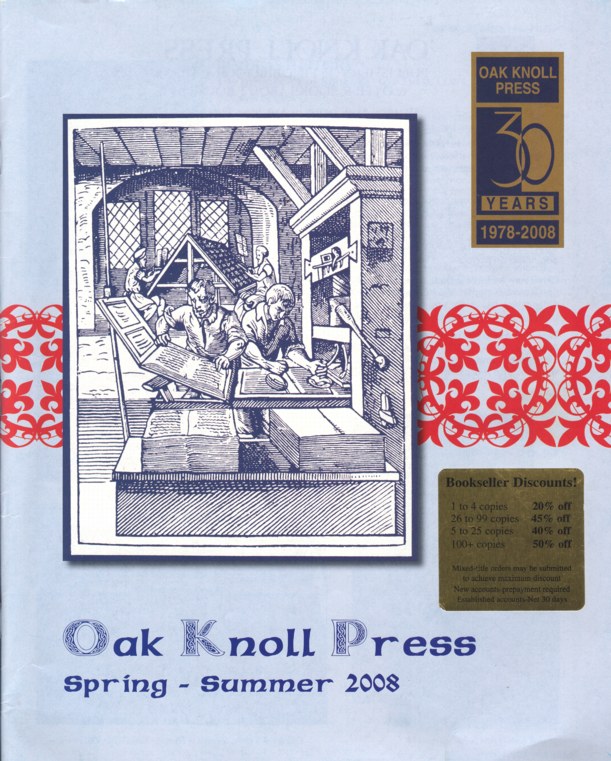 The Oak Knoll Press has issued its Spring-Summer 2008 catalogue. This is Oak Knoll's press, as opposed to its old and rare bookselling division. The Press prints books, but within Oak Knoll's specialty of books about books and the book arts. This catalogue includes both items hot off the press (and some scheduled for publication later this year) and books they have published over the past decade or so. Numerous bibliographies as well as other resources for information not obtainable elsewhere are offered. Here are a few of the new books the Oak Knoll Press has, or will soon have, available.

Available in September is a new book by David Pearson that looks at those aspects of books which go beyond the matters discussed within: Books as History. The Importance of Books Beyond Their Texts. Books have long played a huge role in civilization communicating thoughts and ideas. However, in the digital age, with electronic texts now available, much of that traditional function is moving elsewhere. This is when it becomes necessary to rethink the role of books, and look at their value beyond content. This book looks at their other aspects and qualities: bindings, printing and various artistic qualities. This is a book not only about the history of the book, but about its future as well. Priced at $49.95.

Here is a history of Britain's longest running commercial publisher: A History of Longmans and Their Books, 1724-1990. Under the auspices of founder Thomas Longman, the firm opened in 1724. Through its almost three centuries in the business, it has published many leading authors such as William Wordsworth and Sir Walter Scott, later Robert Louis Stevenson and A. Conan Doyle. However, it has also specialized in reference works, including such items as Roget's Thesaurus and Gray's Anatomy. The firm had a Longman at the helm until the 1970s, but was sold a few years earlier to the media giant Pearson. Today it continues as an imprint of Pearson, along with such names as Penguin and Grosset and Dunlap, with a specialty in educational books. This history of Longman's was written by Asa Briggs, and will be available in October. $110.

The widespread presence of free public libraries across the U.S.A. disguises the fact that it was not always thus. At the turn of the century, with great financial support from industrialist Andrew Carnegie, public libraries began springing up even in small towns. However, if you dig back deeper into the 18th century, most libraries were private affairs, open only to members who contributed either books or funds to them. Books, and the knowledge within, were to a large extent restricted to the elite. Richard Endorf has edited a group of 16 essays about America's Membership Libraries. These libraries often had names other than "library," such as a society, institute, or often, the athenaeum. They played major roles in culture and learning in their time, and many still exist to this day, although often as research institutions rather than lending libraries. Some maintain important collections reflective of their role in earlier times. $39.95.

"Lewis Carroll," penname for Charles Lutwidge Dodgson, is one of the English language's best-known writers for his Alice stories. However, his final two books were not about Alice, but Sylvie and Bruno. These two characters from Fairyland never caught on the way Alice did. The stories were harder to follow and not a great financial success. Still, they remain a key part of Carroll's career and biography. Offered is An Annotated International Bibliography of Lewis Carroll's Sylvie and Bruno Books, edited by Byron Sewell and Clare Imholtz. It contains over 1,000 bibliographic entries covering all known editions in all languages of the Sylvie and Bruno books. This bibliography also introduces its readers to some of Carroll's literary techniques in the books, provides a complete list of recipients of Carroll's presentation copies, and has a 30-page essay by Carroll scholar Anne Clark Amor. $95.

The Oak Knoll Press may be reached at 302-328-7232 or orders@oakknoll.com. The website is www.oakknoll.com.