Californiana Art from the Arader Galleries 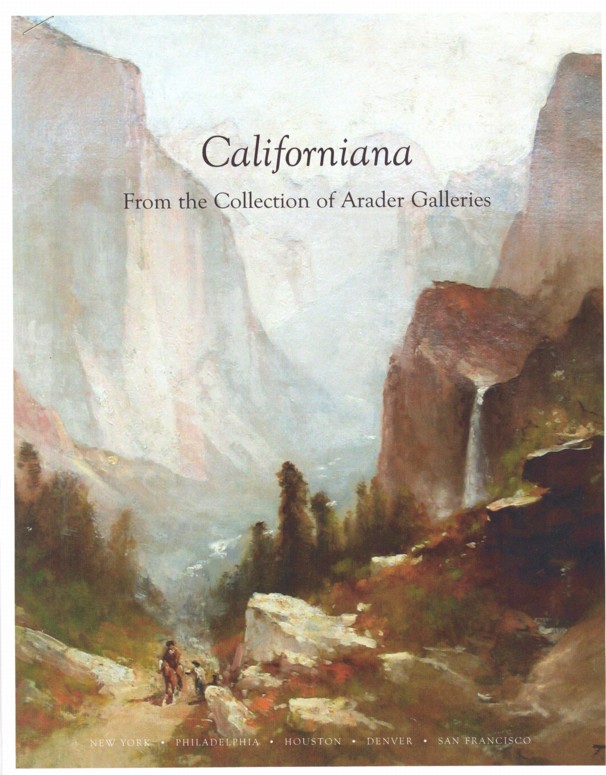 Californiana Art from the Arader Galleries

We have received a new catalogue from the San Francisco location of the Arader Galleries. Arader has six locations in five cities, but the title of this catalogue quickly explains why it was published by the San Francisco Gallery: Californiana. The Arader Galleries have expanded over the years to meet the needs of collectors who go beyond single types, offering books, maps, art and ephemera. This catalogue is focused on art, specifically, 19th century to early 20th century landscape paintings of California.

For most of the first half of the 19th century, California was of little interest to Americans. It was a far off province of another country - Mexico. However, by the 1840s, manifest destiny and expansion was on the minds of many Americans, particularly President Polk. Mexican attempts to regain control over its rebellious province of Texas provided the President with the justification, or excuse, to go to war. When the dust settled (if the dust ever settles in the American Southwest) the United States had defeated its southern neighbor in the Mexican War. The spoils of that victory was the largest acquisition of new territory since the Louisiana Purchase. California was a part of that land. The curtain had barely drawn down on that acquisition when the next major event occurred - the discovery of gold. The California Gold Rush was on, and Americans from the East descended upon the new land. It was soon filled with all kinds of people, prospectors and all of those occupations needed to service them. By 1850, California was accepted into the Union as a new state, and the wild ride that would make it the most populous state in the nation a little over a century later was on.

These landscape paintings are from the second half of the 19th to the early 20th century, when California was still relatively wild, though growing at a rapid pace. As landscape paintings, they depict the quieter, rural side of the state. California scenery is among the most spectacular, beautiful and varied in the land. Arader offers the opportunity to pick your favorite. Here is some of the scenery.

Pictured on the cover is Riders in Yosemite, painted in 1903 by Thomas Hill. Hill was an English immigrant who settled in Massachusetts and spent much of the 1850s painting New Hampshire's White Mountains. However, health issues led him to seek a warmer climate, so in 1861, he made the overland journey to California. He began painting portraits in San Francisco, but the following year took a trip to Yosemite. That became his major subject for the remainder of his life. His Yosemite scenes were exhibited around the world, and in 1883, he opened a studio by the park. His work was in great demand at the time, but his grandiose style was eclipsed in the later years of his life as "old fashioned." However, by the second half of the 20th century, his work had regained its stature and his paintings can be found in such places as the Metropolitan Museum of Art and the While House today. Priced at $135,000.