Autographs and Letters from David Schulson 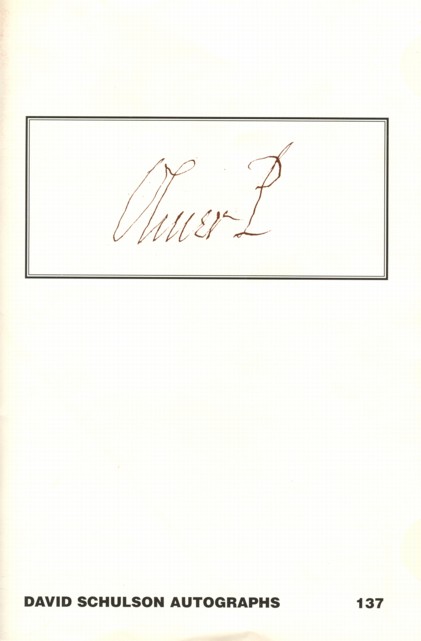 Autographs and Letters from David Schulson

David Schulson Autographs has issued a new catalogue with the succinct, to-the-point title 137. To elaborate on that, Schulson offers a collection of 100 autographed documents, largely personal letters, from European and American notable personalities. There is a concentration of documents from the 19th and early 20th centuries. All types of people are represented, from political to scientific, travelers and writers, and many from the arts. If your interests run to European (including Russian) musical composers and artists, you will definitely want to see this catalogue, as many of the greatest of these names can be found. However, as might be expected from a catalogue that ranges from Dr. Seuss to the Marquis de Sade, just about anything might show up here. So, let's take a look.

It's always reassuring to know that great figures suffered from the same kinds of problems as the rest of us. On November 16, 1939, F. Scott Fitzgerald, of Great Gatsby fame, writes his landlord, Isabel Horton (wife of actor Edward Everett Horton), "Here's the rest of the rent due from October 19th to November 19th. Sorry it's been such a mess..." Fitzgerald had moved to Hollywood at the time to try to make money screenwriting, something he disliked, but his financial situation had become precarious. This letter affirms those difficulties, as he was evidently almost a month late paying his rent. It was only a year later that he suffered a heart attack and died at the age of 44, still living in Hollywood. Item 31. Priced at $3,500.

Dr. Joseph-Ignace Guillotin was a great humanitarian, though most people probably would not think so, considering the device named for him is the guillotine. The good doctor was actually against the death penalty, but so long as it was going to be applied, he believed a quick severance of the head would be far less painful than other means of execution then in place. His idea was put into practice during the French Revolution, and as that spiraled out of control, the device got far more use than Dr. Guillotin could have imagined or wished. On April 29, 1799, he wrote to Senator LeMercier, apologizing for being unable to visit because of "the annoyance of being ill myself, with two bleedings, emetics [something which causes vomiting], bladder relievers, all of which are too good reasons for not leaving my house..." Medicine was not very pleasant, nor helpful in those days, but despite the troubles, Guillotin managed to keep his head about him. Item 38. $2,250.

Some product endorsements are more impressive than others, though there's no sign this one was ever used for advertising purposes. Roald Amundsen writes on August 26, 1912, to "Herr Aug. P. Horn" of the company Pommichau of Silkeborg, Denmark, that their clothing was both pleasant and durable. Presumably it was warm as well, for it had been used on the expedition of the ship Fram to the Antarctic, a trip highlighted by Amundsen's being the first to reach the South Pole, just eight months prior to this letter being written. Item 1. $2,750.