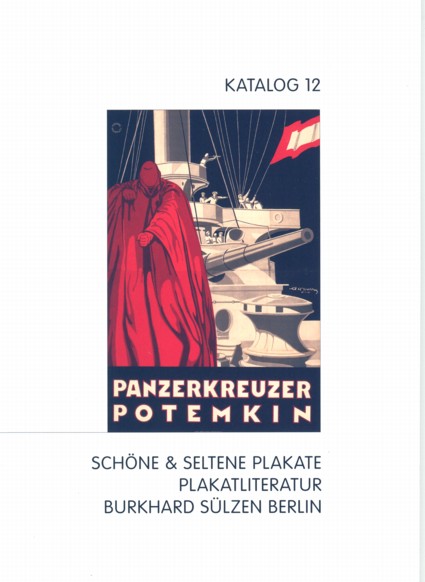 This month we have received our first catalogue from Burkhard Sülzen of Berlin. The title of this 12th catalogue is Schöne & Seltene Plakate, which translates to Fine & Rare Posters. As you might have guessed, this catalogue is in German, so some familiarity with the language is certainly helpful. However, even with a language barrier this is a fascinating catalogue. It is filled with posters from 1890-1973, including many of advertising, politics, film and sports. They are filled with dramatic images to convey their messages, which in turn tell us about their times. This is a riveting catalogue even if you haven't mastered the language. Here are some of these fabulous, sometimes frightening, always intriguing posters.

Item 21 is a poster for a Soviet film celebrating the early days of the Russian Revolution. Its date of 1926, when the effects of that revolution were not yet fully appreciated in Europe, explains why such a film would be shown in Austria. The heading is Der blutige Sommtag, or The bloody Sunday. This event occurred in St. Petersburg in 1905. Thousands of workers protesting labor conditions in the country peacefully marched on the Tsar's home, hoping he would support reforms for workers. Instead, guards fired on the crowd, gunning down hundreds, maybe thousands. Anger from the event led to the unsuccessful Revolution of 1905, which in turn set the stage for the Bolshevik Revolution twelve years later. This poster depicts a guard, with the face of a skeleton, sword in hand, riding a speedy horse. Priced at €480 (approximately $751 in U.S. dollars).

Item 24 is an Austrian poster for the noted Soviet propaganda film Panzerkreuzer Potemkin (Battleship Potemkin). This 1924 film, from noted Soviet director Sergei Eisenstein, received critical acclaim even in the West. It tells of another revolt in 1905, this time by the crew of the Potemkin over their conditions, which was also forcefully put down. Eisenstein portrayed the incident in a way designed to elicit the greatest sympathy for the sailors, and contempt for the Tsarist regime. This poster is seen on the cover of the catalogue (click the thumbnail image above to see). €9,500 (US $14,864).

Items 50-57 are another group of pro-Communist posters, but not from the Soviet Union. These are from the German election of 1928, a good year for the Communists who captured over 10% of the vote, several times what the Nazis managed that year. However, in the next two elections, they were only able to add a few points to their vote total while the Nazis became the leading party, with consequences too well known. These posters generally depict Communists as strong, powerful men, while members of other parties are unattractive, bureaucratic-looking individuals.

While the political world was on the cusp of disaster in 1928, there was still relief in the theaters. Item 76 is an Austrian movie poster from 1928 with a seductive image of Greta Garbo for the film The Divine Woman. It is a good thing that this poster can be found, as for the movie itself, all but one nine-minute reel has been lost. It is the only lost Garbo film, and is considered to be one of the most important of the lost silent movies. €2,200 (US $3,442).