Abolition from the William Reese Company 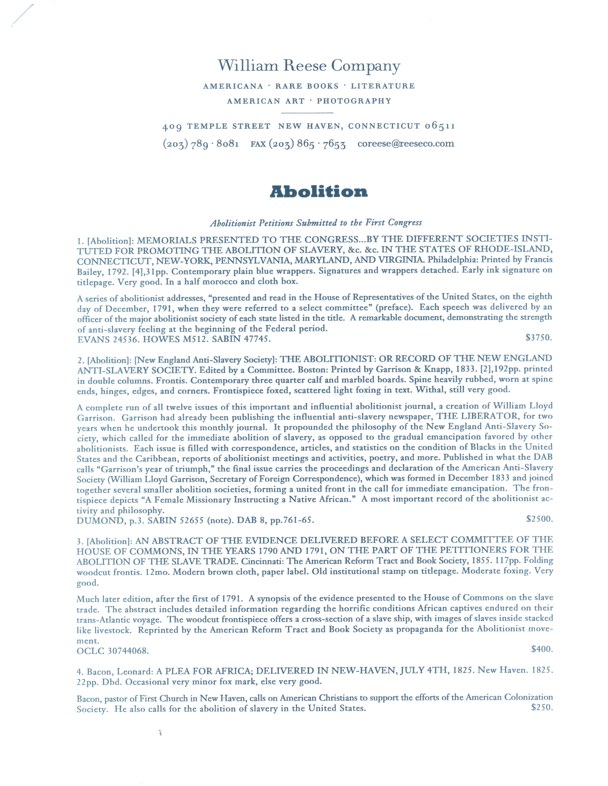 Abolition from the William Reese Company

The William Reese Company has issued a new list of books headed Abolition. Most of these works, naturally, pertain to slavery and the attempts to end (or defend) it. While most items relate to the United States, there are many that tackle the issue in the West Indies and with their colonial rulers in England. Additionally, there are items focused not so much on the issue of slavery per se, but about other issues dealing with human rights and freedom. These are issues of fundamental concern to a free people, worthy of our attention still today, as while they evolve, concern for freedom never goes away. Now, here are a few items Reese has to offer.

One of the earliest American abolitionists was Anthony Benezet. Indeed, while rumblings were just beginning to be heard for liberty from British authority, Benezet was pointing to the oppression of slaves within the colonies' midst. "How many of those who distinguish themselves as the Advocates of Liberty, remain insensible and inattentive to the treatment of thousands and tens of thousands of our fellow men, who...are at this very time kept in the most deplorable state of Slavery, in many parts of the British Dominions?" The question would haunt America for another century. Item 5 is the 1767 first British edition (published a year after the Philadelphia edition) of A Caution to Great Britain and Her Colonies, in a Short Representation of the Calamitous State of Enslaved Negroes in the British Dominions. Priced at $750.

Benezet would go on to found the Pennsylvania Society for the Abolition of Slavery in 1774. While there was much else going on at the time to fill a patriot's time, he still managed to attract many leaders of the coming revolution to his cause. Officers of the organization included Benjamin Franklin, Thomas Paine, Benjamin Rush and Tench Coxe. In 1787, the anti-slavery organization updated its constitution, just as America was preparing its first such document. Item 65 is The Constitution of the Pennsylvania Society, For Promoting the Abolition of Slavery, and the relief of Free Negroes, Unlawfully Held in Bondage. Begun in the Year 1774, and Enlagred [sic]...1787. Item 65. $3,250.

It was not long before calls for abolition would be heard in the halls of the new congress. Item 1 is Memorials Presented to the Congress...by Different Societies Instituted for Promoting the Abolition of Slavery. These were speeches made before the House of Representatives by leaders of various state abolitionist societies in December of 1791 (and printed in 1792). The presentations were referred to a committee, where all such things disappear. $3,750.

Here is the name of an abolitionist you know well, but not for that cause. At the age of 22, P.T. Barnum was publishing a liberal newspaper in Bridgeport, Connecticut. He attacked slavery, church leaders, and those who sought to silence him. Young Barnum was sentenced to 60 days in jail for libel, and on his release, supporters managed to round up a crowd of 1,500 to rally in his defense. It was evidently quite a show, and leads one to believe that Barnum must have learned much from it he would put to good use later on. Item 25 is The Nation's Bulwark An Oration, on the Freedom of the Press, Delivered at the Courthouse in Danbury...on the Liberation of P.T. Barnum, by Theophilus Fisk, published in 1832. $375.