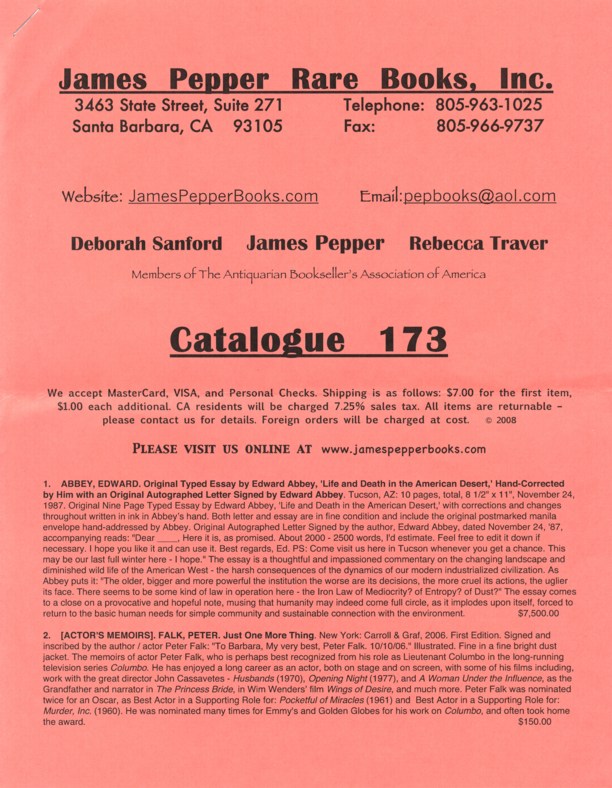 James Pepper Rare Books has issued Catalogue 173, a new collection of books, manuscripts and ephemera focused on literary first editions, mystery, and items related to the stage and screen. American culture from the past century is on display, from the great books and films, writers and actors, to the not-so great names who also have had their place on center stage for a brief time. This may not be a catalogue of Lincoln and Washington, but it is a catalogue of Americana that will bring back memories, recent and distant, to all who inhabit this land. Here are a few of these items.

Who could better represent American culture of the last quarter of the 20th century, the good, bad and strange, than one of its biggest names, Michael Jackson? From child prodigy to huge star to certified weirdo, it's doubtful anyone else received as much press in his era than Jackson. Item 54 is Michael Jackson - Unauthorized, a 1994 biography by Christopher Andersen. This copy is signed and inscribed, presumably with an ungloved hand, by its subject. It is inscribed "To Holly," to which Jackson has added a heart, peace sign, and a self-portrait drawing in ink. Priced at $1,500.

Item 57 comes from the library of another American cultural icon of the second half of the 20th century, Jacqueline Kennedy Onassis. The book is Pueblo - Mountain, Village, Dance, by Vincent Scully (the art historian, not the Dodgers broadcaster). It sounds like the sort of book she would have found interesting. This copy bears the bookplate "The Estate of Jacqueline Kennedy Onassis" from the Sotheby's sale of 1996. $400.

Item 129 is a strange, but most amusing letter from Orson Welles to author Carl Carmer, best known for the autobiographical Stars Fell on Alabama. Carmer had mistaken Welles for a publisher named "Wells," which led Welles to tell a tale about his Godfather and source of his middle name ("Orson" was his middle name), amazingly enough an unrelated man named Orson Wells. He concludes the story with, "The point is I have... and Godfather Orson lack[s] - a little "e" after the first two "L's". It's a pity, too. I should have loved an interview with the author of "Stars Fell On Alabama" and "Listen for a Lonesome Drum." I am, - regrettably - Orson WELLES." $1,850.

Item 78 is a draft letter from a great funnyman, but it is not at all humorous. Groucho Marx had been given a script for a play, which he evidently expected would be of a more serious nature. He wanted a role playing someone other than Groucho Marx. Apparently, it was instead written to Groucho's usual character. Responds Marx, "I hope this isn't too much of a shock, but the play is a terrible disappointment to me. Each time I read it I liked it less." He goes on to say the play is "full of artificial situations that I am sure no audience would swallow. There is hardly a genuine character in the play..." Despite his distaste for the play, he concludes "it should be easy to cast," and recommends Sam Jaffy, Sam Levine, or Monty Wooley for his role. However, "Personally, I don't want to be in it." The typed draft of this letter contains Groucho's hand-written annotations. $450.