Images of Plants, Animals, and the Old West at Arader Galleries 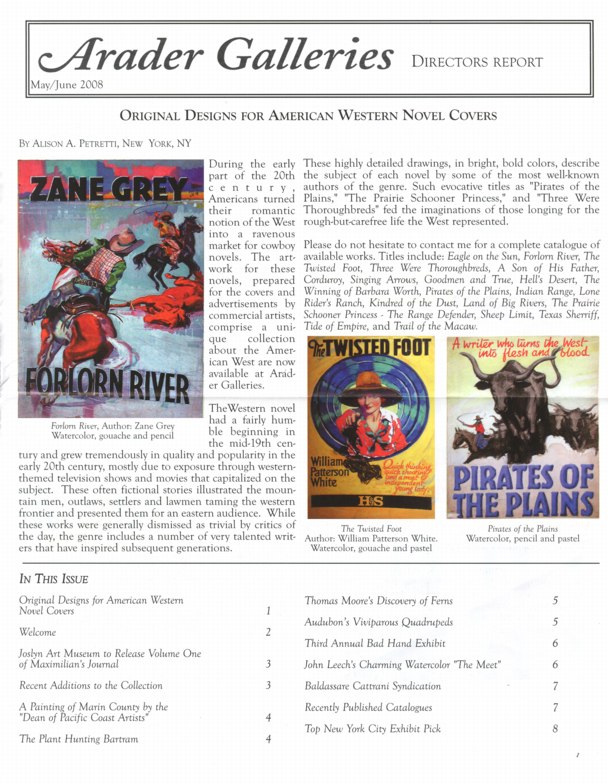 Images of Plants, Animals, and the Old West at Arader Galleries

The latest issue of Arader Galleries' Directors' Report, for May-June 2008, is now available. These Reports aren't catalogues, but updates of what is going on, or some of the special items on display, at various Arader Galleries. There are six of them now, two in New York, and one each in Philadelphia, Denver, Houston, and San Francisco. Most people in America should be reasonably close to one, though it is a bit of a haul if you live in North Dakota. Nevertheless, it's good to get away for awhile, so you might want to plan a trip to one of these locales. Here are a few of the topics discussed in the latest Directors' Report.

On the cover of the Report you will see some classic American book art, created for the covers or advertising of novels on the American West. These books were extremely popular during the first half of the 20th century. "Kids" of all ages couldn't put down these tales of cowboys and Indians, good guys and bad guys, lawmen and villains. These were morality plays of good and evil, though some certainly did not place Native Americans fairly on that spectrum. Few of these writers were appreciated by their contemporaries. These books were considered dime novels, cheap entertainment with little literary merit. However, looking back, we can appreciate the skill many of these writers brought to their craft. And, we can certainly appreciate the cover art, dramatic and enticing, if not always true to life. The Arader Galleries in New York has a collection of this artwork in their New York gallery.

John and William Bartram, father and son, were two of America's earliest botanists. They undertook several journeys into the wilderness, particularly the South, to discover, describe, and bring back specimens of plants at the time unknown. They discovered the Venus Flytrap and the very rare "Franklin Tree," named for their good friend Benjamin Franklin. The Franklin Tree was found only on a couple of acres in Georgia, and went extinct in the wild two centuries ago. It survives today only through the offspring of seeds the Bartrams took back to Philadelphia. Arader has copies of John Bartram's 1769 A Description of East-Florida with a Journal kept by John Bartram... not only an outstanding botany but one of the best early descriptions of Florida, and William Bartram's 1791 Travels Through North and South Carolina, Georgia, East & West Florida... which also tells much about the territories' natural history and the Indians who lived there. These two important works are also in New York.

John James Audubon is best remembered for his Birds of America, but his follow-up was quite spectacular too. Published from 1845-1848, it is The Viviparous Quadrupeds of North America. Now there's a word you probably don't use everyday. "Viviparous" means giving live birth, rather than laying eggs. Audubon's birds were not viviparous. This was Audubon's last work, with many of the illustrations done by his son, John Woodhouse Audubon. You can see images of some of these animals native to Texas at the Houston Gallery.