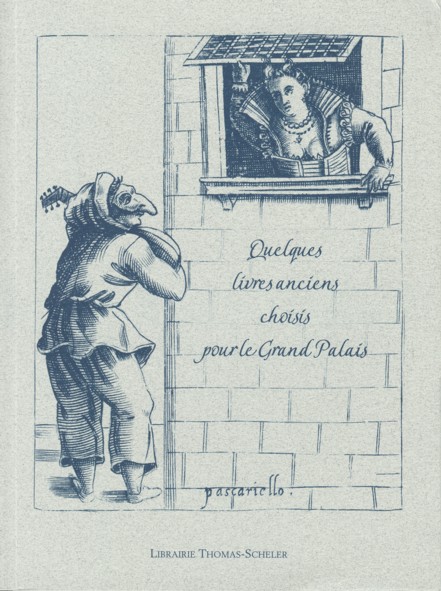 Librairie Thomas-Scheler issued a catalogue for the recent Antiquarian Book Fair held at the Grand Palais in Paris: Quelques livres anciens choisis pour le Grand Palais (some antiquarian books chosen for the "Grand Palais" or Great Palace ). The Grand Palais is a spectacular glass domed exhibition hall in Paris that was built for the Paris Exhibition of 1900. Librairie-Thomas Scheler brought some of their finest books to the show, one hundred of which are described in this catalogue. Descriptions are thorough and numerous color images of the works are provided. As a note of caution, the catalogue is, logically, in the French language, so some familiarity with French is helpful. However, while French is the most common language of the books offered, many European languages, including Latin and English, are represented. The books themselves are not necessarily related to French topics either, though many are. Here is our best attempt to describe some of what we saw, but as they say in America, please pardon our French.

A great atlas can transcend language barriers, which is a good thing since not that many people speak Latin any more. Item 69 is the Atlas sive Cosmographicae Meditationes De Fabrica mundi et fabricati figura. This is a four-volume atlas from Gerard Mercator, published in Amsterdam in 1632. Mercator was one of the earliest of the great map and atlas makers of the 16th and 17th centuries, his work still spectacular today. Priced at €35,000 (or approximate US dollar equivalent of $54,435).

Here is a work English speakers will understand. Well... maybe not. It is Molecular Structure of Nucleic Acids. A Structure for Deoxyribose Nucleic Acid, by James Watson and Francis Crick. This 1953 offprint from Nature magazine is not easy to understand in any language, but it is one of the most important scientific articles of the century. It introduced DNA and how it transfers genetic characteristics from one generation to the next. This copy is signed by both Crick and Watson, and comes with a 1963 copy of Crick's Nobel Lecture, also signed by Crick. Item 97. €45,000 (US $69,988).

Item 29 is a scandalous book, at least by late 18th century standards. It is Les Liaisons Dangereuses (Dangerous Liaisons) by Pierre Choderlos de Laclos. It contains fictional letters concerning the morally challenged behavior of the aristocracy in the late royal era of France. Offered is the most spectacular edition of this work, with the finest illustrations. The Pierpont Morgan Library's The Art of the French Illustrated Book describes the illustrations in this 1796 edition: "These striking plates form the outstanding contemporary interpretation of Les Liaisons Dangereuses. They are not likely to be superceded however often this celebrated novel is illustrated." €60,000 (US $93,318).

Item 43 represents a celebrated American-French relationship: Oeuvres de M. Franklin... published in 1773. This is the first French edition of scientific works by American scientist and statesman Benjamin Franklin. Franklin's friend Barbeu Dubourg translated the work. It contains Franklin's writings on electricity, magnetism, and many other scientific topics. Franklin was always very friendly toward France and its people, and after the American Revolution broke out, he would use his connections to obtain French assistance for America's war of independence. €2,250 (US $3,500).