A Variety from Waverly Books 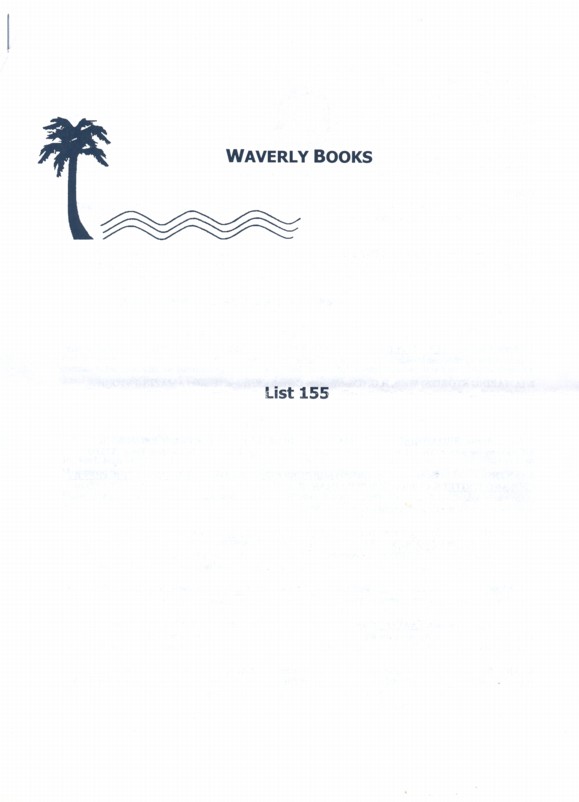 A Variety from Waverly Books

Waverly Books has issued their List 155 of books from various fields. This list includes 161 items, and among the subjects covered are art, film, literature, sports, music, mystery, photography, children's books, and more. Many of the items are not so much "books" but things such as film scripts. In terms of date, these pieces are overwhelmingly 20th century. These are some of the items you will find in this latest collection from Waverly.

Item 87 is a fictional piece about prison life by a real-life warden, Lewis Lawes. Lawes served as warden of New York's Sing Sing prison for 21 years, and midway through this period, wrote 20,000 Years in Sing Sing, published in 1932. It was made into a movie of the same name starring Spencer Tracy and Bette Davis later that year. Tracy is an influential gangster who at first fights the system, but reforms his behavior under the watchful eye of the warden. He is eventually allowed a one-day furlough when his woman, Davis, is injured in an automobile accident. This leads to an unfortunate set of events where Tracy is falsely accused of a killing. While the work is fictional, it did serve as a vehicle for Lawes' reformist ideas for prison, a seemingly forgotten view these days that prisons should attempt to change the behavior of their inmates. This book was again made into a film in 1940, though this time the name was reformed to "Castle on the Hudson." Priced at $275.

One sure sign that immortality does not last forever is when your children don't know who Bob Hope was. Is this possible? Was anyone more of an American icon in the mid-20th century? Item 103 is the first edition, self-published (in Hollywood) book by Hope: They Got Me Covered. This book was published in 1941 and is signed by Hope with the following comment: "Honestly! It's Nothing But The Truth." $450.

Here is something for Chicago Cubs fans. Perhaps it will make up for the lack of World Series victories you have seen in the last century. Item 18 is The Chicago Cubs, by Warren Brown. It was published in 1946, and would celebrate that the Cubbies had made it to the Series the previous season, before losing to the Tigers in seven games. However, the Cubs have not even made it back to the Series since. $200.

From the diamond to the rectangle, we go to basketball and one of the most dominant players any sport has seen: Wilt Chamberlain. He still is one of the first names to be mentioned as the greatest offensive player of all time, among his records being the unimaginable one of scoring 100 points in a game. Item 24 is an inscribed second printing of Chamberlain's biography, A View From Above. However, this biography became famous not for its account of Chamberlain's basketball skills but for his claim to have slept with 20,000 women. The claim raised shock and more than a bit of disbelief, as it would have required Chamberlain to have slept with an average of more than one different woman everyday since the time he was 15. It seems likely that Chamberlain lost count somewhere along the way, but if his claim was exaggerated, his reputation was such that he likely came closer to that number than just about anyone else. Chamberlain died in 1999 at the age of only 63, perhaps worn out from his escapades, but the seven-footer remains a legend both on and off the court. $125.