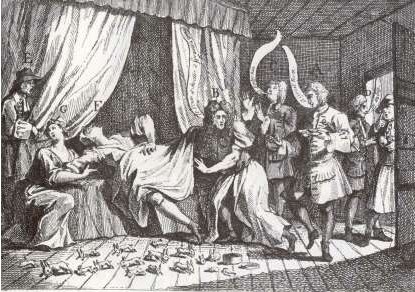 Now we go to a case of extraordinary gullibility, a hoax perpetrated on some physicians and men of science that is both hilarious and thoroughly repulsive. In 1726, one Mary Toft of Surrey, England, claimed to have given birth to a litter of rabbits. Indeed, she produced both whole rabbits and rabbit parts. She explained that she had become obsessed with rabbits and rabbit stew. One of those who apparently witnessed one of these miraculous births was Nathaniel St. Andre, the King's surgeon and anatomist. He was fully taken in, and the theory was promulgated that intense focus on rabbits resulted in impressions on her young fetus, turning it into rabbits. Science was not so advanced in 1726. In 1727, St. Andre published A Short Narrative of an Extraordinary Delivery of Rabbets, Perform'd by Mr. John Howard Surgeon at Guilford. Eventually, Ms. Toft was discovered having rabbits smuggled into her room, where...oh God...I cannot say where she put them. Some people just go too far to play a practical joke. Actually, she was probably less interested in a prank than in securing some sort of pension for her wondrous capacity. Not surprisingly, the eminent physicians St. Andre and Howard were horribly embarrassed by the episode, but you may still have a laugh at their expense. Item 99. $600.

Item 40 is a group of eight pamphlets dated 1862-1869 concerning the Hoosac Tunnel. Begun is 1852, it took over 20 years to complete, and helped bankrupt its original builder, the Troy and Greenfield Railroad. It was designed to facilitate transportation between Boston and the Midwest. The Hoosac Tunnel, drilled through Hoosac Mountain in western Massachusetts, was no small feat. When completed, at 4 ¾ miles, it was the longest tunnel in America, and second longest in the world. One hundred ninety-five workers lost their lives during construction. The Hoosac remained the longest tunnel in North America until 1916 when Canada's Connaught Tunnel was completed, but remains the longest east of the Rocky Mountains. Though passenger service through the tunnel ended in 1958, it is still used for freight trains. Among the pamphlets are The Road to Ruin: or, the Decline and Fall of the Hoosac Tunnel (from the period when construction was stopped), The Hoosac Tunnel: Our Financial Maelstrom, and The Last Agony of the Great Bore. Despite its problems in the 1860s, the tunnel would see completion in the following decade. $250.