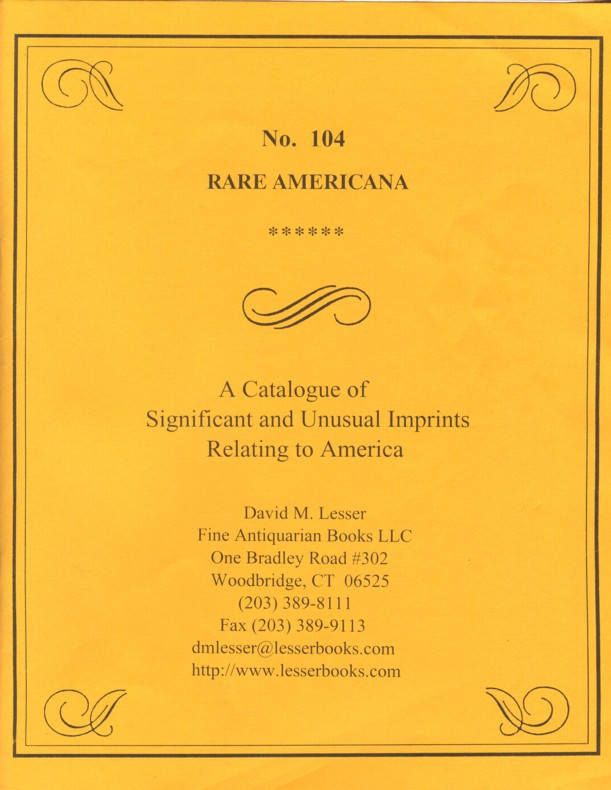 David M. Lesser Fine Antiquarian Books recently released their 104th catalogue of Significant and Unusual Imprints Relating to America. There are works ranging from colonial times to the early 20th century. Most were published in America, though there is a good representation of British imprints as well, particularly from colonial times. Most involve significant issues of their time, though a few are just plain curious. Here are some samples of what we found this month.

"Mather" was probably the most important name in ecclesiastical circles in colonial America. Starting with Richard, then Increase, and finally Cotton Mather, they were the leading theologians, historians, and thinkers of their time. However, Cotton did get swept up in the Salem witch hunts and his at least tacit acceptance of the process remains a blemish on his record. The famed first three generations of Mathers were gone almost half a century before the American Revolution, but Cotton's son Samuel was still living at the time. Samuel, like his forefathers, led a church for all of his adult life, but never generated the following of his ancestors, and the illustrious line of family churchmen died out with him. However, Samuel Mather is remembered for his devotion to the patriot cause, no small feat considering his brother-in-law was the rabidly loyalist colonial governor of Massachusetts, and his son was also a devoted Tory. Nonetheless, in 1773, Samuel Mather published An Attempt to Shew, that America Must Be Known to the Ancients... a combination of theology and justification for liberty and independence of America. He would be a strong supporter of the revolution three years later. Item 55. $3,000.

There have been numerous books written about the "inferiority" of the Negro race, which makes one wonder to whom they are supposed to be inferior. Certainly not Buckner Payne, who wrote The Negro: What is his Ethnological Status? Is He the Progeny of Ham? Is He a Descendant of Adam and Eve? Has He a Soul? Or is He a Beast in God's Nomenclature? Payne concluded that blacks were not descended from Adam, but were on Earth before the first man. Therefore, they were beasts, and were among the animals Noah took on the arc. Explains Payne, "...if on the earth before Adam, he is inevitably a beast, and as a beast, entered the arc." This is a second edition from 1867 (same year as the first) of this Tennessee racist's book. Item 78. $175.

The difficulties of prejudice black Americans faced even after the Civil War can be seen in this document, Appointment to be a Member of the Board of Education. County of Levy. This was a Reconstruction appointment to a local Florida school board in 1869 of Franklin Jordan, a black man. It is signed by Thurston Chase, Florida's first Superintendent of Public Instruction, and Jonathan C. Gibbs, Florida's Secretary of State and Chase's successor, and one of the very few black public officials in the country at the time. On the back of the appointment, is a contemporary pencil notation, "Nigger, but better than most of the white office holders." We can only wonder why, but for whatever reason, a day after accepting the position, Jordan resigned, with the notation "on account of trouble with Nigger interference." Item 47. $850.