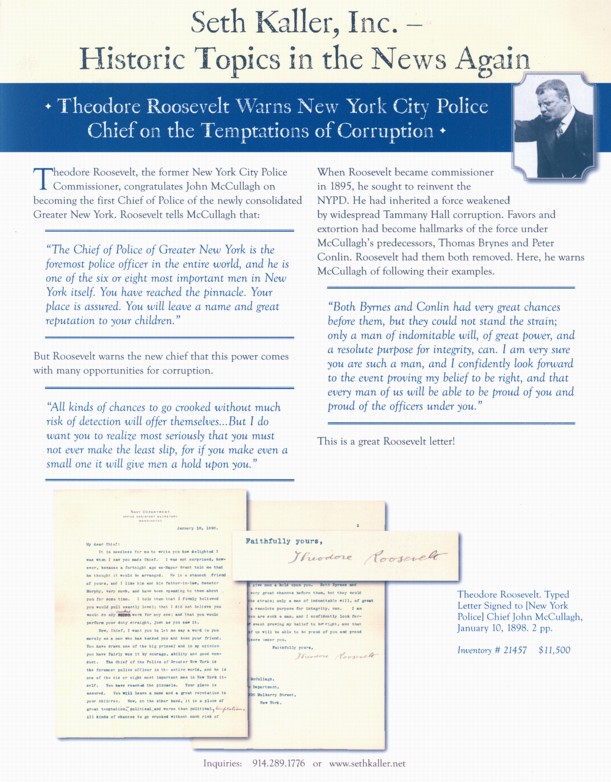 We received a pair of pamphlets recently from Seth Kaller, Inc. Kaller specializes in important historic documents, often handwritten or signed. These items fit that description well, most in the writer's hand, all but one signed. The names here represented all made their way to the White House, all but one being one of the early presidents. Each letter provides an insight into some of the burning issues of its time. Here are a few.

On October 22, 1780, when General George Washington wrote this letter to George Mason, the patriots' cause must have looked almost hopeless. Now encamped near Passaic Falls, New Jersey, Washington surveyed a desperate situation. The military campaign was not going well, food was scarce, his troops had neither proper supplies nor clothing, and he had no money to pay them. Washington would soon face mutiny from some of his soldiers. General Benedict Arnold had just turned traitor and was leading some of the enemy's troops, while the British were now sending forces south for what would initially be a successful campaign. Writes Washington, "We are without money...without provision...without Cloathing; and shortly shall be (in a manner) without Men. In a word, we have lived upon expedients till we can live no longer, and it may truly be said that, the history of this War is a history of false hopes and temporary devices..." It would have been hard for Washington to imagine on this day that just a year later, he would be leading his troops in the decisive battle at Yorktown which would result in the British withdrawing and a victory for the patriots. Priced at $300,000.

John Adams was not a happy man in the years after his defeat for reelection as president in 1800. He had been attacked by Alexander Hamilton's faction within his own Federalist Party, unhappy that he had not acted militarily against France. Meanwhile, Thomas Jefferson's Democratic-Republicans were particularly angered by the undemocratic Alien and Sedition Acts. Adams went down to defeat an embittered man. Years later, he began to vent some of that anger in a series of letters to the Boston Patriot newspaper. In this letter, dated April 20, 1809, he states that his cause was to preserve the Union and its independence against both France and England, leading him to do his best to avoid war with either. However, because of his unwillingness to side with England, he claims "...the Federalists in New York with Hamilton at their head in Secret Caucus agreed to sacrifice Adams..." Carrying the paranoia a bit further, he says that French influence drove him from office, "...but it would not have had the Power if it had not been essentially assisted by the Pharisaical Jesuitical Machiavilian Intrigues and Influence of the leading Federalists." In explaining his policy of avoiding war, though both England and France, at war with each other, had not respected the neutrality of American shipping, Adams writes, "England and France have both given us just Cause of war. But neither has yet made it necessary..." $160,000.