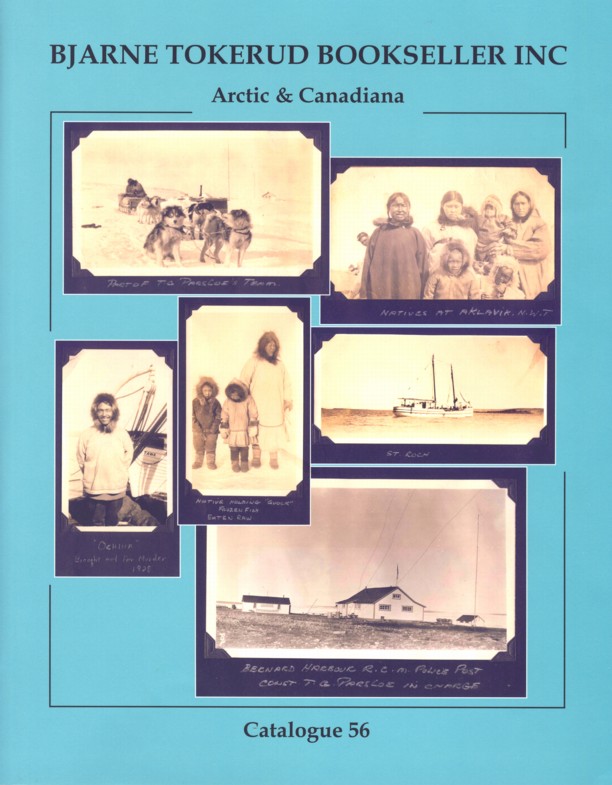 We recently received our first catalogue from Bjarne Tokerud Bookseller, Inc., though this is number 56 for the Victoria, British Columbia bookseller. Offered is a selection of Arctic and Canadiana. As the cover photographs suggest, you may want to dress warmly before reading this catalogue. It is filled with high adventures, though what made many so adventurous were the challenges against ice and cold. These may not be exploits you want to try for yourself, but they make exciting reading. Here are some of the items we found in this latest catalogue from Tokerud. Note: all prices are given in Canadian dollars, which are currently virtually equivalent to U.S. dollars.

The most notable of Canadian inland travels were those performed by Alexander Mackenzie in the late 18th century. Mackenzie was a fur trader for the Northwest Company who wished to find an overland route to the Pacific. His account of those travels is found in this 1801 book Voyages from Montreal on the River St. Laurence [sic] Through the Continent of North America to the Frozen and Pacific Oceans in the Years 1789 and 1793, with a Preliminary Account of the Rise, Progress, and Present State of the Fur Trade of that Country. He believed he might be able to find a route from Great Slave Lake, in the Northwest Territories, all the way to the Pacific. He followed the wide river exiting that lake all the way to its end. That river is now named for him - the Mackenzie River - but it exited in what he called the "Frozen Ocean," or as we know it, the Arctic Ocean. A disappointed Mackenzie reportedly dubbed it the "River of Disappointment," with Sir John Franklin later renaming it for the explorer. Despite this disappointment, Alexander Mackenzie was obviously not easily discouraged, as four years later, he tried again. This time, he traveled from Lake Athabasca down the Peace River to the Fraser (which he thought to be the Columbia River). However, after traveling a ways down the Fraser, he followed the advice of local Indians and proceeded along a combination overland and river route that eventually brought him to the Bella Coola River, and from there into the salt water Dean Channel that empties into the Pacific. It was here he carved his name on a rock with the date July 22, 1793, to show he had reached his goal. Mackenzie was the first European to cross the North American continent north of Mexico. Item 26 is an inscribed first edition presentation copy of his book, to Henry Addington, British Prime Minister from 1801-1804. Priced at $35,000.

Many years later, the Canadian government sent Captain R.P. Bishop out to find Mackenzie's Rock. That he did, and the Department of the Interior published this pamphlet around the time of this trip in 1923: Mackenzie's Rock. With a Map Showing the Course Followed by the Explorer from Bella Coola, B.C., to the Rock... Item 60. $30.

It is hard to imagine deliberately subjecting oneself to a journey such as that of Fridtjof Nansen and his crew. They hoped to reach the North Pole, but with no expectation of a brief trip. They loaded up with five years worth of provisions and headed along the Northeast Passage. They turned their ship, the Fram (later used by Antarctic explorer Roald Amundsen), into the ice flows, hoping to drift to the North Pole. After a year of this, they concluded they would not reach their goal, so Nansen and Hjalmar Johansen took off with 28 dogs and two kayaks for a land journey, knowing they would not be able to return to the Fram. They were turned back short of the Pole by terrible conditions, but on April 8, 1895, they reached farther north than anyone before. The two then had to make their way back south, wintering over on some islands before running across a British expedition the following year on Franz Josef Land. Item 33 is Nansen's book, "Farthest North." Being a Record of a Voyage for Exploration of the Ship Fram 1893-96, and of a Fifteen Months' Sleigh Journey by Dr. Nansen and Lieut. Johansen... published in 1897 (this is the first British edition). $350.