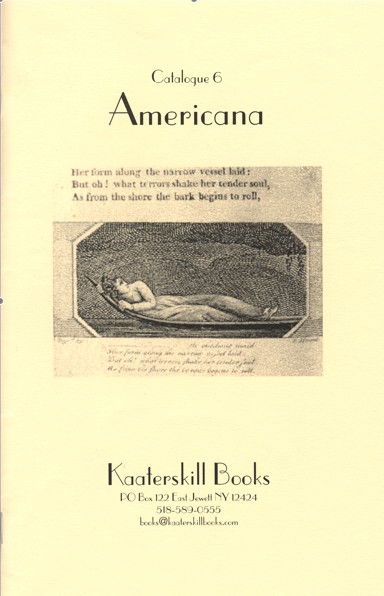 Kaaterskill Books has issued their Catalogue 6 - Americana. This is a collection of truly fascinating old works, but most come with the kind of prices you find on eBay, maybe better. These are not, for the most part, famous works, but they represent a real slice of life in America in the late 18th and 19th centuries. There are books, printed speeches, legal pleadings, official documents, travelogues and more, covering the issues of the day. Sermons frequently stray from the theological to the political, particularly where slavery is concerned. Among the items offered is a group of 35 July 4th speeches. Don't assume these just represent a lot of standard flag waving, as many of these speeches touch on the burning issues of the day. They provide insight into America at the time. And, most are priced in the $10-$35 range. Like we said, eBay pricing. This is a great catalogue. Now, here are a few of the items offered.

In 1831, Samuel Prince and others petitioned the Boston School Committee to open a high school for girls. The Committee's response is presented in the Report of the Common Council, on the Subject of a High School for Girls. The answer was "no." The committee reasoned that the cost would be too great because, while most boys dropped out of school by the age of 14 to become apprentices, the girls would probably hang around running up expenses much longer. Besides, girls do not give back as much to the community as boys, so a primary school education is sufficient for them. Item 21. Priced at $95.

Item 59 is a large volume filled with photographs taken over a century ago along America's southwestern border. It is the Report of the Boundary Commission upon the Survey and Re-marking of the Boundary between the United States and Mexico west of the Rio Grande, 1891-1896. It includes photographs of the views at each of the 258 boundary markers, with captions in English and Spanish. This copy contains an inscription from L. Seward Terry, Secretary of the U.S. Commission. $2,500.

State militias are something of an afterthought in the U.S. today, but their one-time role may shed some light on whether the Second Amendment's right to bear arms was meant as an individual or public right. In the 1828 Militia Report of William H. Sumner, Adjutant General...to his Excellency Levi Lincoln, Governor...of Massachusetts, Sumner writes, "Under the Constitution, the Militia must ever be estimated the bulwark of civil and individual liberty. Directed by public sentiment, it will guard us from the oppression of power...it will secure us from anarchy...and properly armed and disciplined, it forms an impenetrable barrier to the invader." In the early days of the republic, there was great fear of federal power and a standing army, which might force its will on the states. The state militia was seen as the people's best defense against such a power. Item 132. $75.