Catalogues for Two Fairs from the Antiquariaat Forum 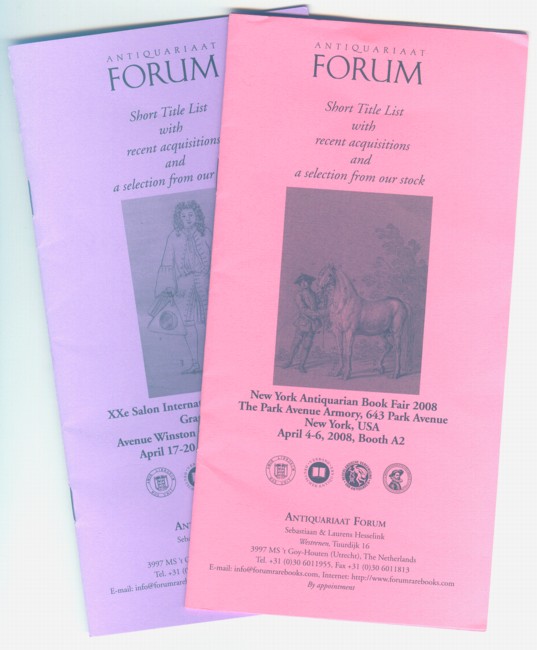 The Antiquariaat Forum attends numerous book fairs over the course of a year, and prints up small catalogues for each show. Last month was a particularly busy one as they participated in shows in both New York and Paris. First it was the New York Antiquarian Book Fair at the beginning of the month, followed by the Salon International du Livre Ancien in Paris two weeks later. That is a lot of miles and a lot of effort, but the Antiquariaat Forum offers books appropriate for fairs which attract the highest level of collectors. For each appearance, the Dutch bookseller printed a Short Title List for visitors. Here are a few selections from those lists.

La Galerie Agreable du Monde, by Pieter van der Aa, published in 1729. The Antiquariaat Forum describes this 66-part in 20-volumes folio set as "Absolutely the biggest map and print book ever published and definitely the rarest book ever to be found complete. Never before nor ever after was such an ambitious and costly project realized, to offer the public a truly universal pictorial encyclopedia of the world." There are almost 4,000 engravings in this set, which reportedly was published in only 100 copies. Price on request.

The Scholemaster, a 1571 work on education by Roger Ascham (bound with A Report and Discourse, written on the Affairs of State of Germany...). Ascham propounded a kinder and gentler form of education, using encouragement rather than physical coercion. His strange views were taken seriously as he had been the private tutor for Queen Elizabeth in her pre-queen years. $12,650.

Aventures d'Alice au Pays des Merveilles. This is a first French edition of "Alice's Adventures in the Country of Wonders," an 1869 printing of Lewis Carroll's classic of convoluted logic. This copy comes with an autographed letter in French from the author. $10,300.

Roadsters Album, by C.B. Newhouse. If you are looking for fast cars, look again. This item was published in 1845, and all of these roadsters needed to be pulled by horses. $37,200.

Voyage Pittoresque Autour du Monde. This is Ludovik Choris' voyage around the world, described by the Antiquariatt Forum as "one of the rarest and most beautiful of all Pacific voyage plate books..." It includes scenes of natural history and native life along the Pacific coast of North America, from California to Alaska, as well as Hawaii and other islands. Published from 1820-22. €153,700 (approximate equivalent of US $243,256).

Album de Redoute, the rarest of major works from famed French rose artist Pierre-Joseph Redoute. Published in 1824, Redoute combined plates from various of his other works, including "Les Roses" and "Les Liliaces." Each album is unique as they were assembled from stock by Redoute himself. Price on request.