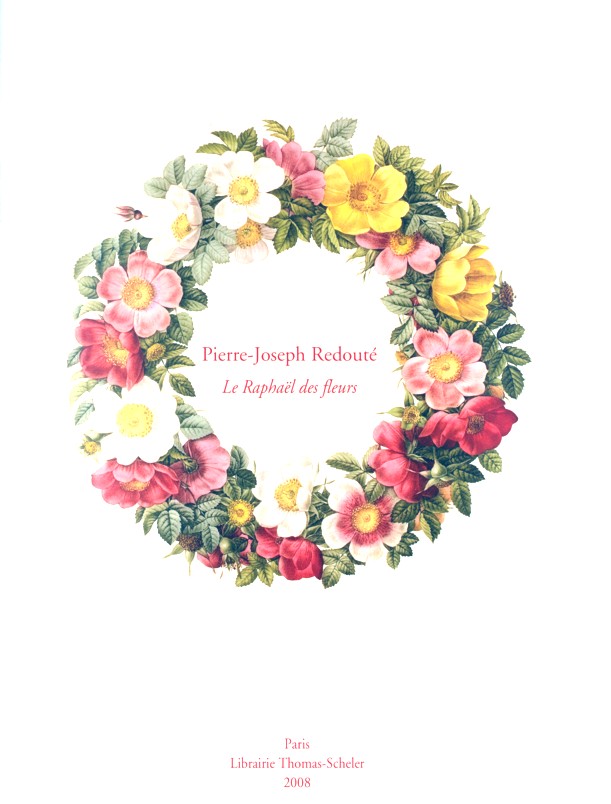 We recently received a beautiful catalogue from Librairie Thomas-Scheler of Paris entitled Pierre-Joseph Redoute Le Raphael des fleures (the Raphael of flowers). This is not a typical bookseller's catalogue. There are no prices and it is somewhat vague as to exactly what is being offered. Nonetheless, it is filled with illustrations from Redoute's works, a biography of his long and fascinating career, and descriptions of his notable works. Those who appreciate the finest of flower illustrations will undoubtedly know Redoute well, and will be most interested in viewing this catalogue, perhaps wishing to check with Thomas-Scheler for further details. While Redoute is best known for his drawings of roses, he drew many types of flowers and his work was always magnificent.

Pierre Joseph Redoute, born in Luxembourg, moved to Paris as a young man to find work as an artist. That he did at the Jardin du Roi (King's Garden), the country's major botanical gardens. His exceptional skills at illustration continued to move his career forward. Redoute could dissect a flower and portray it with exceptional accuracy and beauty. His talents earned him the job as official artist for Queen Marie Antoinette in the 1780s. Of course, events did not go well for the Queen or her King during the next decade, as the French Revolution took the royal pair and just about everyone associated with them to prison or the guillotine. Redoute was even called in to paint a night-blooming cactus for the Queen while she was in prison. Yet despite this connection to royalty, Redoute was able to fade into the background during the Reign of Terror, quietly continuing his painting unscathed.

He would emerge again at the top of society at the turn of the century when Napoleon's Empress Josephine would summon Redoute to be the official artist at the gardens of her estate at Malmaison. This relationship would remain for the rest of her life, and led to the first of his two greatest works, Les Liliacees (lilies). This was probably the best time of his life. His illustrations were recognized for the masterpieces they were, and his connection to the Empress paid off financially as well. Redoute purchased a lovely country home, fine furniture, and he and his family led a very comfortable life. However, after Josephine's death in 1814, the funds began to dry up. Redoute would remain connected with the restored monarchies that succeeded Napoleon, and continue to be honored. In 1824, his Les Roses was completed, the greatest of all of his works. He was named to the Legion of Honor the following year, and later received a major award from the King of Belgium. However, the pay was never quite as good, and Redoute, who tended to live lavishly when he had the money with little planning for the future, battled financial difficulties for the remainder of his life. He spent much of that time teaching others to paint. Pierre-Joseph Redoute died in his studio in 1840 at the age of 80.