Egypt and the Sudan from Michael Graves-Johnston 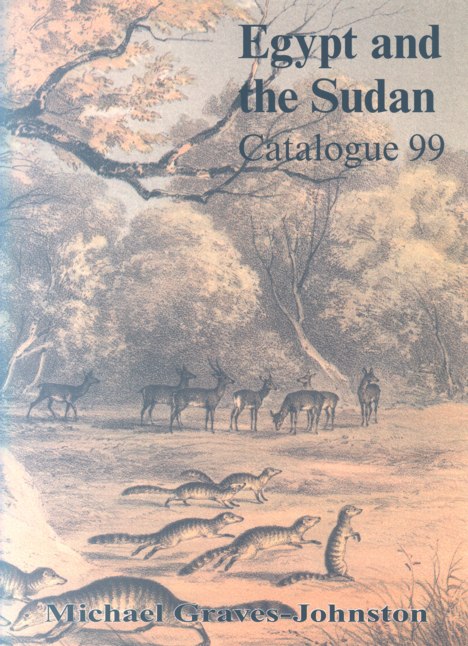 Egypt and the Sudan from Michael Graves-Johnston

Recently received from Michael Graves-Johnston is Egypt and the Sudan, Catalogue 99. This is a land of incredible history, great civilizations that have come and gone. It seems almost incomprehensible that a land with such history, once one of the most advanced civilizations on earth, could have the problems of today's Egypt, or the downright horror of the Sudan. Graves-Johnston's catalogue offers 427 items, covering the discoveries of this land's astonishing ancient past, its history, intrigues, and changing rulers of the past two centuries, the discoveries of European explorers of those last two centuries, and all about the culture of this territory along the Nile. Four thousand years of history have been squeezed into the pages of this catalogue. Let's take a look.

Giuseppe Passalacqua went to Egypt in the 1820s to be a horse trader. That business failed (perhaps he would have done better as a camel trader), but the entrepreneurial Passalacqua came up with another idea. He began digging up ancient tombs and collecting all sorts of artifacts. No ordinary grave robber, Passalacqua carted his haul off to Paris for display. In 1826, he published in Paris a catalogue of his discoveries, Catalogue raisonne et historique des Antiquites decouvertes en Egypte... He next tried to sell the collection to the French government for display at the Louvre, but his price was too high. So, Passalacqua offered the collection to Frederick Wilhelm IV of Prussia, who bought it for one-quarter of the original asking price plus a lifetime job as curator of the Egyptian collections in Berlin. Passalacqua's catalogue is offered as item 278, priced at £650 (approximately $1,290 in US dollars).

One antiquity that Passalacqua did not attempt to bring back with him was Cleopatra's Needle, one of three such "needles" (technically, an obelisk) found in Heliopolis, an ancient Egyptian city. Perhaps its weight of 180 tons was sufficient discouragement. It was originally built by King Thutmose III around 1500 BC. Thutmose was a successful warrior and king, conquering lands as far as the Euphrates. He erected the obelisks to celebrate himself, though Ramses would take advantage of them to add his own self-congratulatory inscriptions 200 years later. A much later Egyptian ruler gave one of Cleopatra's Needles to Britain in 1819 in recognition of their victory over the French in the Battle of the Nile. However, while appreciative, the British declined to take the gift home, figuring it was not worth the cost of moving it. It was not until 1877 that a privately funded British group attempted to take the obelisk to England. A long, cylindrical pontoon to support its weight was built to be towed to England. However, it capsized in a storm with the loss of several lives. Nevertheless, it stayed afloat, and eventually the obelisk made it to London where it stands today. Item 188 is Rev. James King's history of the monument: Cleopatra's Needle. A History of the London Obelisk with an exposition of the Hieroglyphics, published in 1886. £50 (US $99).