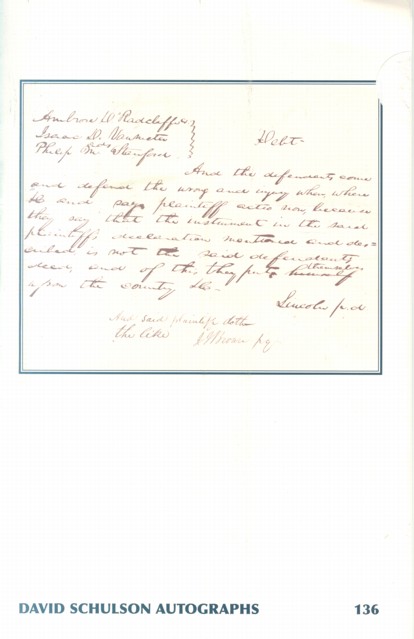 The latest collection from David Schulson Autographs has arrived, simply titled 136. It contains signatures of notable figures from all walks of life - politics, music, art, architecture, science, literature, film, aviation, military and law. Some are simple signatures, others signed photographs, and many are letters and other documents written by their notable signers. There are both American and European autographs offered, and they range from the 18th through the 20th centuries. Here are a few from this latest collection.

Charles Lutwidge Dodgson, better known to most as Lewis Carroll of "Alice in Wonderland" fame, always had his distinctive sense of humor. On May 1, 1888, Dodgson replied to a party invitation by noting, "...I can but return to my now-stereotyped answer that I gave up going out to parties some years ago - Life is getting too short, & too busy, to spend one's time so; & besides, I have talked all my small talk - haven't any more left." The letter is signed "C.L. Dodgson." Item 32. Priced at $4,500.

Many of Ernest Hemingway's letters similarly reflect his personality, over-the-top macho, filled with references to partying and drinking. However, Hemingway could be all business too. Item 46 is a most fascinating letter as it was written to Barbara Cohen (Holdridge) from Cuba on July 20, 1952. The 22-year-old Cohen and a fellow recent college graduate were just forming Caedmon Records, which would grow to be the major recorder of the spoken word (the label is now owned by Harper Collins). The young entrepreneurs had just signed their first act, convincing Dylan Thomas to read his poetry before their microphones. Hemingway responds to Cohen with a series of business questions that imply he expected Caedmon to be something more than a start-up. "What books has the Caedmon publishers published? Who are the officers and directors of the firm? What references will you give me? With your present distribution how many recordings can you expect to sell at $4.95?" Cohen had proposed Thomas' deal, a $500 advance and 10% royalties. Hemingway responds that his terms are a $5,000 advance and 16% royalties. Hemingway concludes, "You are dealing with the disposal of a part of my life's work. I hope you did not think I would be so stupid as to give it to you to play with or batten on." He then adds a postscript, "Do you have any idea of the value of the property you are negotiating for?" Certainly, Hemingway did not suffer from a shrunken ego, but for all his bluster, he did sign on and record for Caedmon (we don't know the terms). $7,750.

Thomas DeQuincey was a British writer who veered into the world of drugs in an earlier time. He is best remembered for writing about it in 1822 in Confessions of an English Opium-Eater. One Sunday morning, he wrote to a Miss Craig, "From the confusion of my room, and the malarrangements I have hitherto made for the purpose of applying some remedy to this confusion, I find this morning that, partly from absence in Edinb. yesterday, have fallen into arrears of 4 pages, all of which however shall this day go off to Tipperary; and henceforward, by means of a new and angelic method which commence this day, no such accumulation shall take place." In other words, he is cleaning up his act and will get his pages out in a timely manner in the future. One can only wonder what he was smoking when he wrote that explanation. Item 30. $1,650.