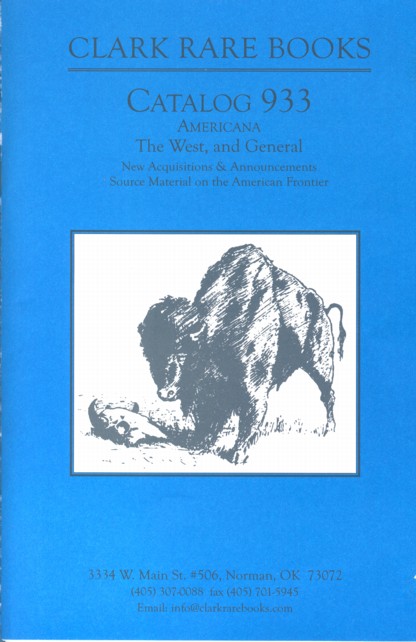 Recently released was Catalog 933 of Americana, The West, and General from Clark Rare Books. This is a catalogue of just over 250 items overwhelmingly of Western Americana. There are some exceptions, such as books about journeys to Vinland or Columbus' visit to the New World, which would definitely be better described as Eastern Americana, but still, this is mostly a catalogue for aficionados of the Old West. So, without further ado, let's take a look inside.

Some visionaries do not have that great vision in their youth. Item 218 is An Oration. July 4th, 1804, given by recent law school graduate Junius Smith before the Society of Cincinnati in Hartford, Connecticut. Smith would one day foresee steam-powered ships crossing the ocean, replacing the old sailing ships. He outfitted the first such Atlantic crossing by a ship powered only by steam in 1838. He was not able to successfully commercialize this venture and moved on to other things, but he still had a notable career. However, returning to 1804, he was not so visionary then. His speech that day was an oration against the Louisiana Purchase, one of the greatest real estate buys ever. Priced at $75.

Item 85 is an 1866 second edition of Albert D. Richardson's take of imprisonment behind Confederate lines, The Secret Service, The Field, The Dungeon, and the Escape. Richardson was a reporter for the New York Tribune, who did not receive journalistic immunity when captured attempting to pass through Confederate lines near Vicksburg. He was hoping to reach General Grant. Richardson endured 20 months under terrible conditions before he and two others managed an unlikely escape. His terrible ordeal was made even worse by the news that his wife and daughter died while he was in prison. $45.

And now, as Paul Harvey would say, for the rest of the story. After returning home, the widowed Richardson fell in love with Abby Sage McFarland, an actress then married to Daniel McFarland. Depending on whom you believe, McFarland was either an abusive husband, or a devoted, wronged one. Whichever, he responded by attempting to kill Richardson. That 1867 attempt did not restore him to his wife's good graces. She proceeded to divorce the man. McFarland was not forgiving. Two years later, he again made an attempt on Richardson's life, this time in the Tribune's office. The second time was a charm, at least for McFarland. However, Richardson lingered for a week, and on his deathbed, he and Abby were wed, with Tribune editor Horace Greeley ("Go West, young man") in attendance and famed preacher Henry Ward Beecher officiating. Two years later, the almost instantaneous widow published this tribute to her husband: Garnered Sheaves from the Writings of Albert D. Richardson collected and arranged by his wife... Abby returned to the stage, and wrote many books, but though she lived another 30 years, she never remarried. As for Daniel McFarland, the public was sympathetic to his position as aggrieved husband. At his trial, the jury found him not guilty by reason of insanity, but despite his "insanity," he was awarded custody of his and Abby's 12-year-old son. Mrs. Richardson's tribute to her husband, published in 1871, is item 39. $50.