Incunables and Other Old Books from Lex Antiqua 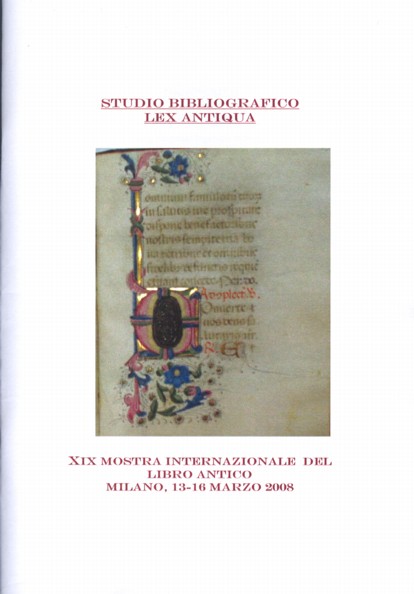 Incunables and Other Old Books from Lex Antiqua

Studio Bibliografico Lex Antiqua published a catalogue for the recent International Antiquarian Book Fair in Milan. Listed were books in five categories: Manuscripts; Incunabula; 16th Century Editions; 17th-19th Century Editions, and Rare Legal Texts. This catalogue is written in the Italian language, so, as I can attest, it is a challenge for those unfamiliar with the language. However, many of the titles are in Latin, so if you collect the types of books found in this catalogue, you likely have some familiarity with one of those languages. We can say, since numerals are universal, that this is a collection of very old books. Eighteen are items of incunabula, while most of the remainder are from the 16th century. This is certainly a fine catalogue for those who are serious about antiquarian books.

Item 6 is the oldest book in the catalogue, published just a few years after Gutenberg's death. The title is Supplementum Summae Pisanelle, and no great surprise for books of this age, it is a theological tract. Evidently it was influential as it went through twenty editions during the 15th century. This edition of the work by Nicolaus De Ausmo was published in 1473. Priced at €16,000 (approximate US equivalent of $25,334).

Item 13 is Flores Albumasaris, a 1495 edition of a work from the 9th century Arab astronomer Albumasar (this is a second edition in this form, the first having been published in 1488). Albumasar was primarily an astrologer, trying to show the relationships between the heavenly bodies and events on earth. He was at least partly right on one of these - the cause of tides. Interestingly, Albumassar made use of old writings of Aristotle, unknown at the time to Europeans, and thereby introduced much of the ancient Greek philosopher's thoughts to the West. €13,950 (US $22,080).

Item 65 is a 1511 edition of De Roma Triumphante by Flavius Blondus (Flavio Biondo). Flavius has often been credited with coining the term "Middle Ages." He was also one of the first archaeologists. He explored the old Roman ruins, in his time (15th century) overgrown and used for cattle grazing. He dug around to reveal Rome's ancient history, and attempted to revive that city's glory. In this book, Flavius seeks to use ancient Rome as a source of pride, and a model for modern government and military forces. €2,150 (US $3,404).

Item 97 is Icones Anatomicae by Albrecht Von Haller, published from 1743-1756. Von Haller was one of the greatest anatomists of his time. This book is a thorough description of human anatomy, filled with plates depicting nearly all of the arteries in the human body, along with many other organs. It was a major resource for many, many years, with generations learning about human anatomy from Von Haller's discoveries. However, at the height of his career, Von Haller resigned his professorship to return to his hometown as a minor public official and write poetry and philosophy, along with science books. €15,000 (US $23,760).

Studio Bibliografico Lex Antiqua may be reached at +39-053491100 or info@lexantiqua.com Their website is www.lexantiqua.com.