Crime and the Law from the Lawbook Exchange 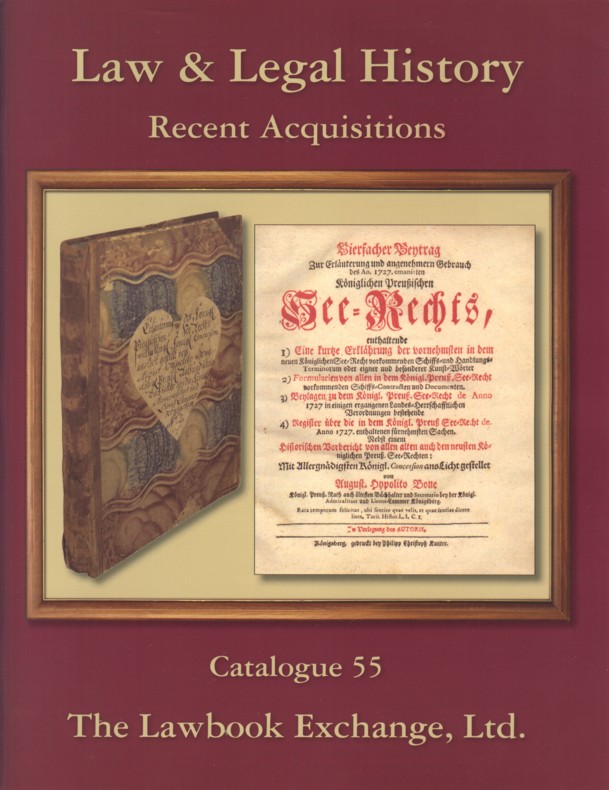 Crime and the Law from the Lawbook Exchange

The Lawbook Exchange has released Catalogue 55 of Law and Legal History. It runs the gamut from scholarly technical texts to accounts of sensational murders. Naturally, we will describe some of the most interesting works, which means the technical stuff gets the short shrift. All of you scholarly legal types will find lots of Blackstone's Commentaries and the like, but we'll focus on items with either more historic or just plain tabloid appeal.

Wanted posters are always appealing. They mean someone cared. Someone cared very much about Albert P. Sherbut in 1916. The Adams Express Company wanted him badly. They probably wanted the $6,605.50 he made off with too. Sherbut allegedly stole a package containing that money from an Adams wagon (though Adams did not see a need to use the word "allegedly," they were certain). Though Sherbut is pictured in a sleeveless shirt, maybe a bathing suit, and a sailor's cap, it is said he was last seen wearing a blue suit, doubled-breasted overcoat, blue felt hat and black lace shoes. We don"t know if Sherbut is still at large, but if you are seeking the $1000 Reward Adams offered, look for someone very old. He would be 115 today. Item 8. Priced at $150.

There were lots of bad people wandering around the streets of Cincinnati, even in the years before they had a professional football team. Item 21, by William De Beck, is self-explanatory: Murder Will Out: The First Step in Crime Leads to the Gallows. The Horrors of the Queen City. Being an Account of Two Soldiers Who Were Executed at Old Fort Washington; And the Trials and Executions of John May; Philip Lewis (Colored); John Cowan, The Murderer of His Family; Washburn, And His Associates; Davis and Hoover, The Butchers of Over 30 Persons; Byron Cooley, Who Killed John Rambo... You get the picture. It goes on and on. But as we see, not even Rambo was safe in Cincinnati. After mentioning a wife murderer, child poisoner, and others, the title concludes with "a Correct Detail of Over Hundred Other Murders." How big could Cincinnati have been in 1867? That’s a lot of killing. The front wrapper describes this as "A Book for the Family." $200.

Item 6 is an historically significant item: Observations on Several Acts of Parliament... published in Boston in 1869. It was put out by the Boston Merchant's Association, and they were not happy with the taxes imposed by the Mother Country. Americans resented taxes without representation, but then again, Americans don't much like taxes with representation either. $4,500.

Those Boston merchants were undoubtedly pleased when the nation won its freedom, but liberty can be short lived if one isn't vigilant. Item 70 is An Enquiry, Concerning the Liberty, and Licentiousness of the Press, And the Uncontrollable Nature of the Human Mind... This 1801 pamphlet by John Thomson opposed the Alien and Sedition Acts. Thomson argued that different political opinions should be debated "with the same unconstrained freedom with which men of science discuss their subjects of investigation. No more danger will result from one discussion, than arises from the other." $3,000.