Eveleigh Books Presents Military, Indian, and Other Early Americana from the Guthman Collection 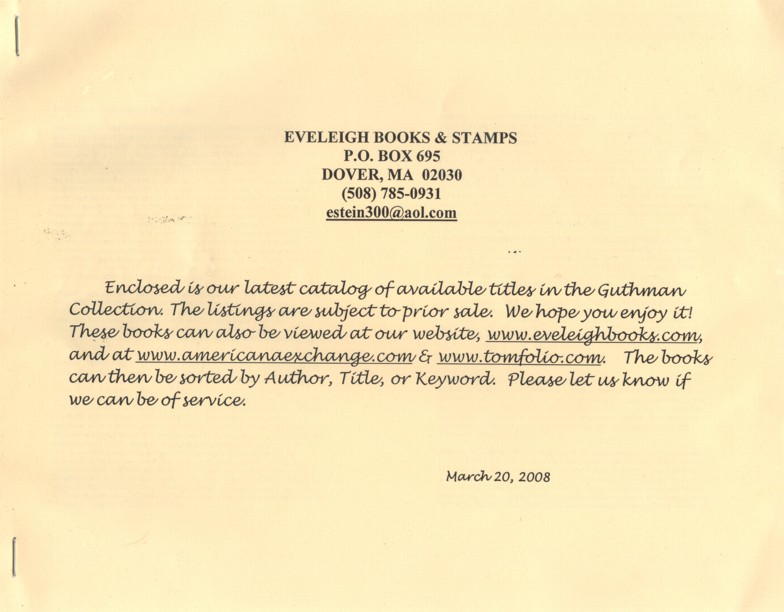 Eveleigh Books Presents Military, Indian, and Other Early Americana from the Guthman Collection

Eveleigh Books and Stamps has issued a catalogue of books from the Guthman Collection. William H. Guthman, who died at age 81 in December of 2006, was a collector and seller of early American antiques. His major specialty was military related items, particularly from Colonial and Revolutionary America. His expertise led to a five-year stint as an appraiser during the early years of Public Broadcasting's Antiques Road Show.

Among the antiquarian items Guthman owned were books, and offered in this latest Eveleigh catalogue is 563 of them from his collection. There are many concerning wars in which America was engaged, from the French and Indian War of colonial times through to the Civil War. There are also a great many works devoted specifically to early American firearms. Other subjects generously represented include Indian pottery and artwork, silver and silversmiths, and local histories from his native Connecticut and nearby areas of Massachusetts, New York, and Pennsylvania. There are also many works of a more general historical nature and catalogues of items in the fields he collected. Here are a few of the items from the Guthman collection now available.

Item 008447 is the Diary and Letters of His Excellency Thomas Hutchinson... Hutchinson was the last British Governor of Massachusetts before the Revolution, and the colonists did not see any excellence in his performance. Though born in America, Hutchinson remained a strong British loyalist to the bitter end. That end came early, as he was driven from the Commonwealth by angry Boston patriots long before the Revolution began. The British were never able to install a successor. This work was not published until 1884, but is still the first edition. It was compiled from documents still in the possession of his descendants, particularly a great-grandson, over a century later. Not surprisingly, it looks at the situation in the colonies from the British perspective. Priced at $750.

Items 008758 and 008759 recount the history of Rogers' Rangers, an irregular unit of British forces noted for its work in the French and Indian War. These special forces engaged in both spying and combat, operating in difficult and rugged terrain where other forces were unsuited. Much of their time was spent in the Lake Champlain area of upstate New York and Vermont, later moving to Quebec and the Great Lakes. Their leader, Robert Rogers, became something of a folk hero at the time, but after the war, intrigue and debts led to a decline in his status. He returned to England, but came back to America on the eve of the Revolution. However, his loyalties were unclear, and declining health and an alcohol problem made him less useful than in his younger days. He offered his services to Washington, who declined, thinking him a spy. He then rounded up a new group of rangers for the British, but was soon relieved of his command. He was evacuated to England after the Revolutionary War, and died in obscurity. Their story is told by Burt Loescher in History of Rogers Rangers, Volume I, the Beginnings, Jan. 1755 - April 6, 1758, and Genesis: Rogers Rangers, the First Green Berets; the Corps and the Revivals, April 6, 1758 - December 24, 1783. Published in 1946 and 1969 and priced at $160 and $149.50.