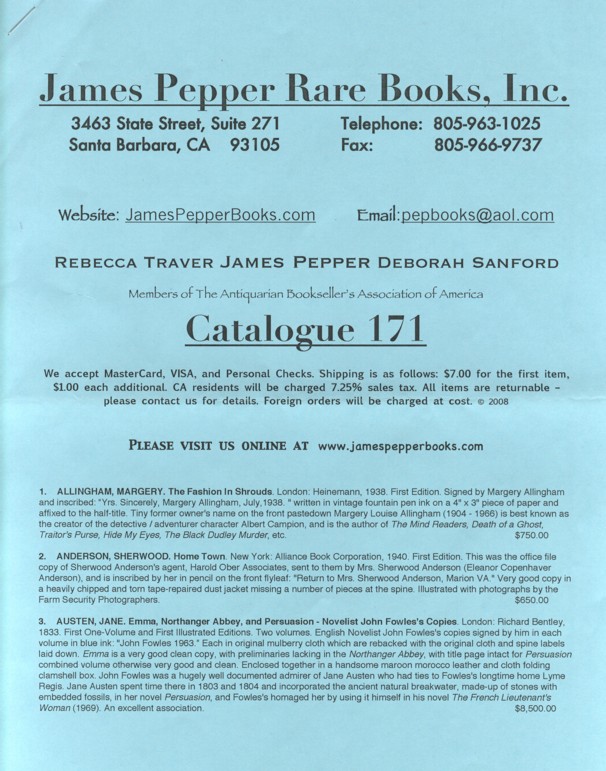 Catalogue 171 from James Pepper Rare Books has just arrived. Pepper always has many items relating to theater and film, along with a good collection of literary first editions. This month, they have 145 entries in their catalogue, including some unusual ephemeral items, and many if not most will be familiar to you. Here are a few.

Item 4 is a copy of Carroll Glines' biography of aviator and U.S. Air Force General James "Jimmy" Doolittle, Jimmy Doolittle. Daredevil, Aviator, and Scientist, published in 1972. Doolittle has inscribed the book as "J.H. Doolittle." Doolittle was certainly a daredevil, with two particularly notable achievements. In 1929, he was the first aviator to complete a totally instrument flight, that is, he conducted the entire flight using instruments alone, never looking out the window. This allowed for developments in flying in fog and bad weather. His other famous achievement was leading America's bombing raid on Tokyo early in the Second World War. It was a major psychological victory for America, an apt response to Pearl Harbor. Doolittle would win many awards for his service including the Medal of Honor during a lifetime which spanned 96 years. Along with the biography several items of memorabilia are included, among them a couple of photographs, a Christmas card from Doolittle, a remembrance card from the passing of Doolittle's wife Josephine, and a 45th anniversary commemorative of his "blind flight." Priced at $750.

As long as we're on generals, here is a surprising item: The Poems of General George S. Patton, Jr. - Lines of Fire, by, naturally, Patton, and edited by Carmine A. Prioli. Who would have known Patton was a poet? Indeed, who could have imagined someone with the nickname "Old Blood and Guts" being a poet? This is no sensitive, tear-jerking verse. It is more oriented toward the glory of war than its horrors, in keeping with Patton's well-established image. Though not published until 1991, this is the first collection of all of Patton's poetry, and includes the historical context of his poems. Item 99. $195.

To return to aviation, item 109 is a 1926 aviator's certificate made out to Mr. F. Gerald Philips. What is notable are the signatures on it. Not that of Mr. Philips, but the certificate is signed by both aviation pioneer Orville Wright and humorist Will Rogers, who ironically would lose his life a few years later in a plane crash. $3,000.

Item 11 is sort of a sports novel: The Year the Yankees Lost the Pennant, by Douglas Wallop. No, this isn't about last year, and the protagonists aren't the Red Sox. The book was published in 1954, which was actually one of the rare years of that era the Yankees did lose the pennant. However, the protagonists were not that year's pennant winners the Cleveland Indians either. No, in the book, it was the lowly Washington Senators. The Senators were long the lowest of the low among baseball teams, so their winning the pennant immediately tabbed this as a work of extreme fiction. In the story, a long-suffering Senator's fan sells his soul to the Devil to become the star hitter who leads the hapless losers to the pennant. The story is perhaps better known for its theatrical and film adaptations, which appeared under the name Damn Yankees. $550.