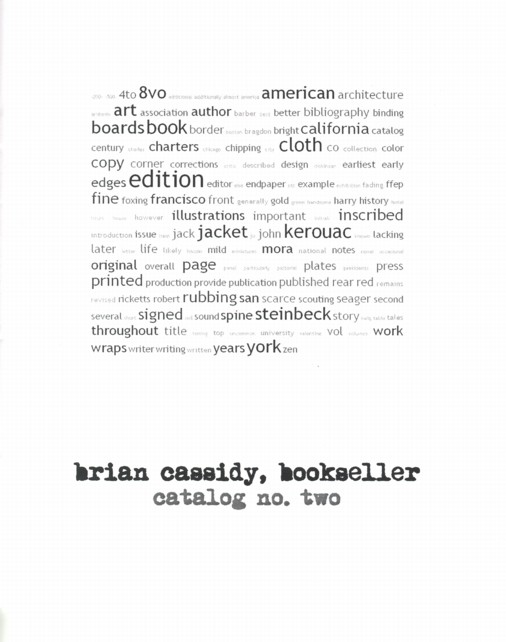 Brian Cassidy, Bookseller has released his catalog no. two. Cassidy offers an eclectic mix of titles hard to describe. There is much from the art or arty world, but then again, there is not much artistic value in a KKK song. So rather than attempt to describe this catalogue, we will describe a few of the varied items to be found inside.

Item 20 is an important Kerouac item, a special copy of Ann Charters' A Bibliography of Works by Jack Kerouac. Charters secured an invitation to visit Kerouac's Cape Cod home in the summer of 1966 to go through his files in preparation for this 1967 bibliography. She later described him as looking more like the father of the image of Kerouac from his dust jackets, perhaps reflecting his years of heavy drinking (Kerouac died two years later at age 47 from cirrhoses of the liver). She spent two days with Kerouac before returning to complete her book. After it was published, she sent a copy to him for corrections in anticipation of the second edition. In a separate book, Charters writes how Kerouac annotated the errors he found in the book and returned the copy to Charters. Somehow, that copy became lost over the years, and its provenance is uncertain, but evidently this is the copy he corrected. It has notations in three handwritings, that of Charters, her husband Samuel, and a third hand in red, with a note also in red (and also likely Kerouac's) that "notations in red = JK's corrections in Annie's copy." All of the corrections here identified as Kerouac's were made in the revised 1975 edition. Priced at $12,500.

Item 43 is one of those stories too horrible to hear, but still necessary to hear. It is David Wdowinski's account of the Warsaw Ghetto and the desperate uprising at the end. Wdowinksi was one of the very few leaders of the revolt to survive and be able to write of the terrible conditions. The 1963 book is entitled And We Are Not Saved, and it is signed by the author. $500.

Item 19 is a run of issues of The Round Table: A Weekly Record of the Notable, the Useful and the Tasteful. This was a New York literary and political weekly, promising to be objective and nonpartisan, but which self-limited the number of name writers it could get to contribute by only publishing items anonymously. Add to this its inauspicious timing (it began publishing during the Civil War), and you have a difficult business proposition. Nonetheless, it published 68 issues from 1863-1864 before suspending publication for the remainder of the war. All of those 68 - Vol. 1 No. 1 - Vol. 2 No. 31 - are included. One notable writer the publication did rope in was Emily Dickinson, who offered My Sabbath. Her short poem begins: "Some keep the Sabbath going to church, / I keep it staying at home, / With a bobolink for a chorister, / And an orchard for a dome." The poem would later be republished under her name with the title Some Keep the Sabbath. $3,750.