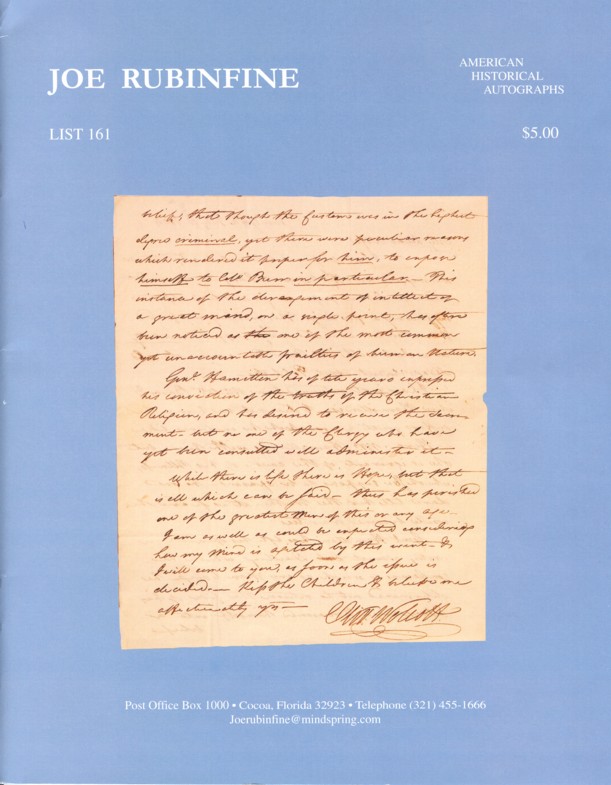 Joe Rubinfine has issued a new catalogue of American Historical Autographs. It includes the most famous of American names, George Washington and Abraham Lincoln, along with numerous other figures from politics, the military, science and invention, business, and law. They range from simple signatures to detailed letters of historical importance. Here are a few of the 51 items available in List 161.

Item 43 is a significant letter from Theodore Roosevelt to friend and political reformer Louisa Lee Schuyler dated February 20, 1912. At the time, Roosevelt was considering a run against his successor and former ally President William Howard Taft. Schuyler was against such a course, but Roosevelt had become very disillusioned with Taft and already had decided to accept the Republican nomination if offered. Speaking of Taft, Roosevelt says, "He is a reactionary, not primarily by preference, but simply because he does not understand the great questions that are up, and has no real conviction on them. He was an admirable lieutenant, but as a general he is utterly incompetent." Roosevelt goes on to say Taft would "make the Republican Party a reactionary party," and in the ultimate comment of disrespect, "not a particle more useful to the country than the Whig Party under Millard Fillmore." Roosevelt was not nominated by the Republicans, ran as a third party candidate, and both he and Taft lost to Democrat Woodrow Wilson. Priced at $17,500.

Item 29 is a pair of letters which describe one of the greatest unnecessary tragedies of early American history, the duel between Alexander Hamilton and Aaron Burr which cost Hamilton his life. They are from Hamilton's friend and successor as Secretary of the Treasury Oliver Wolcott, Jr., to his wife. One is dated July 11, 1804, the day of the duel, while Hamilton still lived, the other July 13, after Hamilton died. Wolcott obviously despised dueling, and notes with irony that Hamilton did as well, despite succumbing to Burr's challenge. Wolcott notes that Hamilton believed "the custom was in the highest degree criminal, yet there were peculiar reasons which rendered it proper for him..." Wolcott continues, "This instance of the derangement of intellect of a great mind, on a simple point, has often been noticed as one of the most common yet unaccountable frailties of human nature." In this first letter, Wolcott also notes that Hamilton is unlikely to survive, that he did not attempt to shoot Burr, and that while his wife is now with him, she was "ignorant of the cause of his Illness" (that seems hard to believe). In his second letter, Wolcott again rails against dueling, marveling on how Hamilton calmly arranged his affairs in advance in case of a bad outcome, "Thus proving his respect for justice in comparatively small matters, & at the same time disregarding its obligations on points of the first importance." Hamilton's actions are all the more incomprehensible to Wolcott because the former deemed dueling "immoral & indefensible," and had earlier lost his own son to a duel. $40,000.