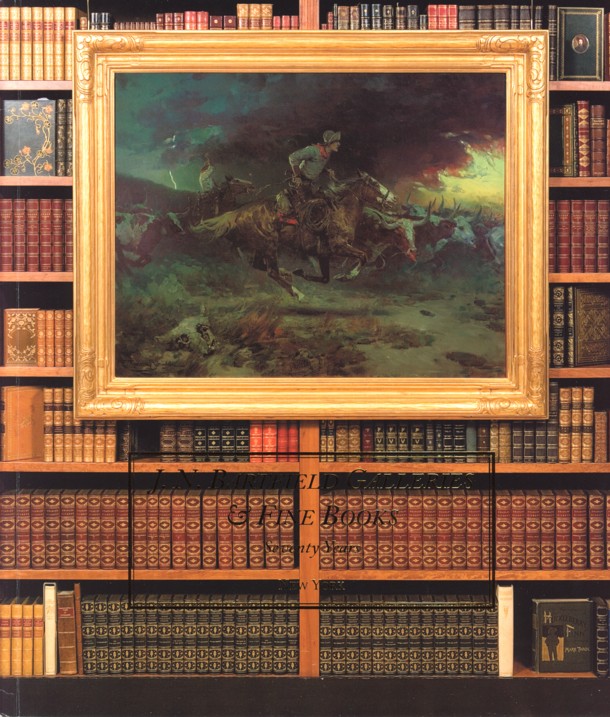 We recently received the latest catalogue from J.N. Bartfield Galleries and Fine Books. Bartfield's is one of the most venerable of booksellers, having been in business in Manhattan for over 70 years. However, the firm does not limit itself to printed or written material, hence the "galleries" in its name. They offer many beautiful paintings and bronze works to go along with the fine books they have offered for so many years. While a visit to their galleries would be exciting, the catalogue provides a reasonable facsimile for those unable to make the trip to New York. Here are some samples of what you might find.

We start with one of if not the first, and perhaps most important of Montana imprints: The Vigilantes of Montana, or Popular Justice in the Rocky Mountains..." Published in 1866, this is the account of Henry Plummer's notorious "road agents," who terrorized the population of that territory's mining towns. Plummer and his associates engaged in robberies and murder throughout the land before Plummer was finally captured. Author Thomas J. Dimsdale was the editor of Virginia City's (Montana) Montana Post, and was a crusader against the lawlessness. Nonetheless, he tried to be objective in recounting the story of Plummer and his gang. His neighbors were not so generous toward Plummer. The outlaw was convicted, but to the locals' dismay, was sentenced to banishment and confiscation of property. The townsfolk had other ideas. Plummer was taken from his home by the good citizens, who provided justice at the end of a rope. Priced at $15,000.

Here is a surprising work for its time (1822) by Mademoiselle St. Sernin: Healthful Sports for Young Ladies... Most young ladies were not engaging in sports at that time. Either they worked sun to sun and half the night too if they were poor, or lived in pampered luxury if they were rich. This book was evidently meant for the latter type, but promoted the value of exercise to the sedentary ladies at a time when doing nothing was an emblem of social status. The author understood that this was not a healthy lifestyle, so she presents various games, such as blind man's buff, shuttlecock and hoops (the old style, not basketball), in which young ladies can participate. The book includes some wonderful illustrations, having been printed by the great publisher of high quality illustrated books of the time, Rudolph Ackermann. $7,500.

Next is likely the most significant 18th century source of information on America's southeastern Indians. Author James Adair was an Irishman who, according to his own statement, spent 40 years trading among the natives of the South. He arrived around 1735 and in 1775 published History of the American Indians, Particularly those Nations adjoining to the Mississippi, East and West Florida, Georgia, South and North Carolina and Virginia... Adair was a fur trader, and in his book, he tells of Indian customs, language, religion, diet, agriculture, tools and more. Sections are focused specifically on the Catawba, Cherokee, and Chickasaw tribes. Additionally, much of the work is focused on proving his belief that the American Indians were descended from the Lost Tribes of Israel, pointing out similarities between the Indians and the Jews. $9,500.