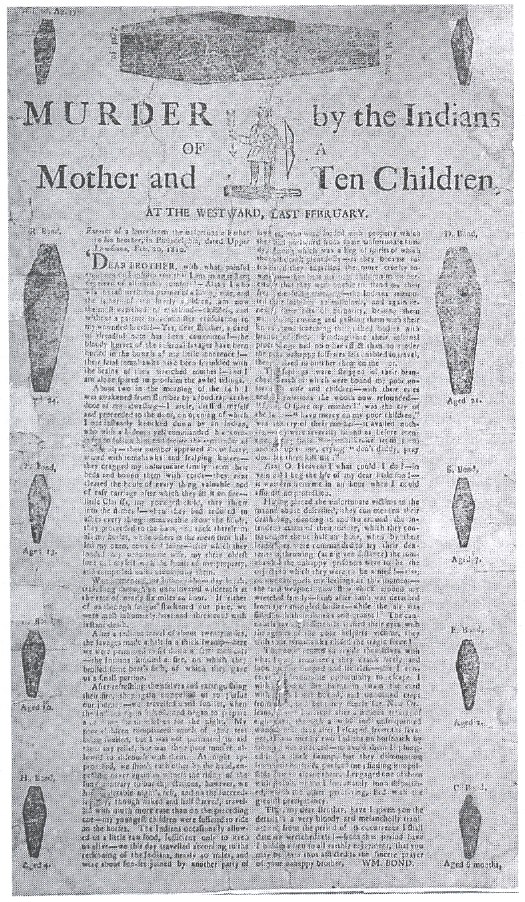 
Here is a not so pleasant Indian item, and an extraordinarily rare one. Item 30 is a broadside written by William Bond in 1810 or 1811. The heading is Murder by the Indians of a Mother and Ten Children. The wife and ten children were Bond's, and this was a letter he wrote to his brother in Philadelphia. I have not been able to confirm its accuracy, but here is his story. Bond and his family lived out on the frontier, near today's border of Arkansas and Mississippi. Their cabin was attacked and put to fire by some 40 Indians on February 10, 1810. Some of the children died in the fire, while the rest were forced to follow their captors on foot through the wilderness. Eventually, they were tied to trees and used for a tomahawk-throwing contest. Bond describes the killings in gruesome detail. Only Bond, who was sold into slavery, survived. He later escaped and made his way to New Orleans. This broadside is in less than perfect condition, but is readable and is one of only two known copies. $25,000.

Here is a notice of a lottery that wasn't much better than those supposed lottery winning notices most of us get by email. In other words, it was essentially a fraud. The broadside claims Wyoming Monthly Lottery...Tickets $1 each or 6 for $5. Chance in every 3. Capital Prize $50,000... 70,755 Prizes amounting to $275,000... James Monroe Pattee, Laramie City, Wyoming. N.B. The money must accompany all order for Tickets... Pattee had previously run a lottery in Nebraska, but when that state outlawed lotteries, he moved on to Wyoming, where he was able to purchase a lottery license. Of course, there were not many residents of Wyoming then (or now), so he advertised his lottery in New York newspapers. Unfortunately, Pattee was a scam artist, and his gullible buyers never received any large payouts. He would only pay a few of the lowest level winners and kept the reputed millions of dollars he took in. This broadside is dated 1876. Item 225. $2,000.