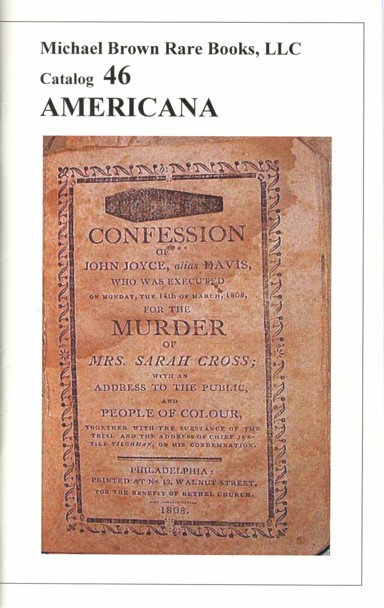 Michael Brown Rare Books has issued their Catalog 46 -- Americana. This is a collection of 225 items of Americana (though a few are really more British), generally rare or obscure. Most range from the period of the late Colonial era to the late 19th century. Along with books and pamphlets are several interesting collections of photographs. This is a fascinating group for those who collect Americana and most certainly worth a careful look. Here are a few examples of what we mean.

Pictured on the cover is the Confession of John Joyce, herein bound with the Confession of Peter Matthias, both published "for the Benefit of Bethel Church" of Philadelphia in 1808. These confessions relate a difficult incident for the African American community of that city. Two black men were convicted of murdering a white shopkeeper during a robbery, the two said to be intoxicated at the time. The confessions were taken by Rev. Richard Allen, founder of the African Methodist Episcopal Church, who used this incident to rail against drunkenness, stealing and "midnight dances and frolics" in the black community. Allen was faced with the reality of whites using any bad acts of individual blacks as proof of the depravity of the race. Additionally, he had a 19th century preacher's condemnatory attitude toward anything even hinting of sin. The result was he found licentious or intoxicated behavior to be not only immoral, but threatening to his race's freedom by stirring anger in the white community. These "confessions" were meant to be morality plays, encouraging more righteous behavior within his community. Item 5. $7,500.

The John Wieland Brewery was one of the largest in San Francisco before Prohibition. Wieland, a German immigrant, made his way from Philadelphia to California during the Gold Rush, made some money in gold, and purchased a local brewery. Renaming it for himself, it became a large operation, and as the family photo albums offered as item 36 will attest, it made him lots of money. The four albums are filled with pictures of elegantly dressed ladies and gentlemen on the family yacht, visiting Catalina Island, and duck hunting. These photos date from 1897-98, the time when the Wielands advertised their brew as the "best beer on earth." We do not know what became of the family, but the brewery closed in 1920 with Prohibition, and an attempt to restart it after Prohibition was repealed was unsuccessful. However, the brand was reestablished, brewed by Pacific Brewing, in turn taken over in 1952 by Falstaff Brewing, which later became part of Pabst (which is definitely not the best beer on earth). $6,000.

Some books you don't even have to open to recognize the author's prejudices. Take, for example, Richard Baxter's 1677 book: Naked Popery; or The Naked Falsehood of a Book Called the Catholick Naked Truth... Item 26. $450. Or how about Giles Firmin's 1656 book: Stablishing Against Shaking: Or, A Discovery of the Prince of Darknesse (scarcely) transformed into an Angel of Light, powerfully now working in the deluded people called, Quakers... Item 61. $1,000. Item 157 is one more piece of prejudice, though you'd never guess it today by the title: The Native American. A Gift for the People. This 1845 work edited by Hector Orr is not an ode of thanks for the people also known as "Indians." In 1845, "native Americans" were not people whose ancestors were born in this land; they were people whose ancestors immigrated from England rather than less "respectable" countries, such as Germany, Italy or Ireland. This is a nativist piece, not a native one. $375.