Books Related to the Polar Regions from Aquila Books 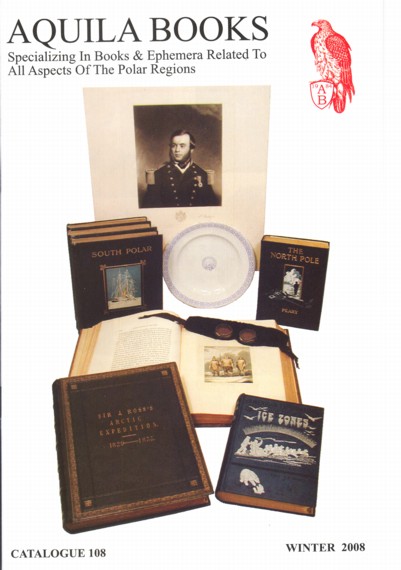 Books Related to the Polar Regions from Aquila Books

Now available from Aquila Books of Calgary, Alberta, Canada is Catalogue 108. Aquila specializes in books and ephemera relating to the polar regions of the globe. Most of these, naturally, concern travels and expeditions, since few people would want to live permanently under such brutal conditions. It is hard to imagine how people could journey to such hostile climes a century and more ago, when so little was available to protect them from the elements, and to help them escape if things went wrong. But they did, and their stories are incredible. Here are some of the works available in this latest catalogue from Aquila Books.

Item 80 is the 1910 first trade edition of Robert Peary's The North Pole. Its Discovery in 1909 Under the Auspices of the Peary Arctic Club. Peary is generally believed to be the first person to reach the North Pole, although he has his share of doubters that he actually attained that location. It is not necessarily a question of honesty so much as the accuracy of his instruments in properly locating the Pole. However, Peary did have a large ego, which has made a few people suspicious. Actually, Peary was one of six people to make the final assault on the Pole, but since he was the expedition leader, and the others included a black man (Matthew Henson) and four Inuit natives, the others did not receive much recognition during that era. This copy includes an inscription to "my friend Governor Aram J. Pothier." Pothier served seven nonconsecutive terms as Governor of Rhode Island between 1909 and 1928. Priced at $800.

For centuries, explorers attempted to find a Northwest Passage that would enable European nations to reach Asia without traversing the circuitous routes around Africa or South America. One of the most notable of those explorers was Sir John Franklin. Item 35 is an 1818 account by him of his second journey, Narrative of a Second Expedition to the Shores of the Polar Sea, in the Years 1825, 1826, and 1827, by John Franklin... This was Franklin's most successful mission, as half of his men died on the first, and all (Franklin included) on his third. During this expedition, Franklin was able to chart much of the northern coast of North America. Spreading out from the Mackenzie delta, they surveyed from Alaska to the Coppermine River, as well as surveying Great Bear Lake. $2,750.

The voyage of the Belgica was a combination disaster and success. Commanded by Adrien de Gerlache, it was the first voyage to Antarctica undertaken solely for scientific purposes. It was also the first to winter over in the Antarctic latitudes, though this was not part of the plan. The crew was not well prepared, and many were either put off or abandoned the expedition before making the final departure from South America. The crew experienced terrible deprivations after being locked in by ice, not making their escape until a year later. Nevertheless, they made many discoveries during their long entrapment. Among those to participate in this expedition were Roald Amundsen, who would later be both the first to reach the South Pole and the first to find a Northwest Passage, and Frederick Cook, who would claim to be the first to reach the North Pole, though few believe his claim today. Item 61 is the rare 1904 German edition of the account by the mission's second in command, Captain Georges Lecointe: Im Reich Der Pinguine (In Penguin Country). $1,750.