Books from the Past from Helen R. Kahn Rare Books 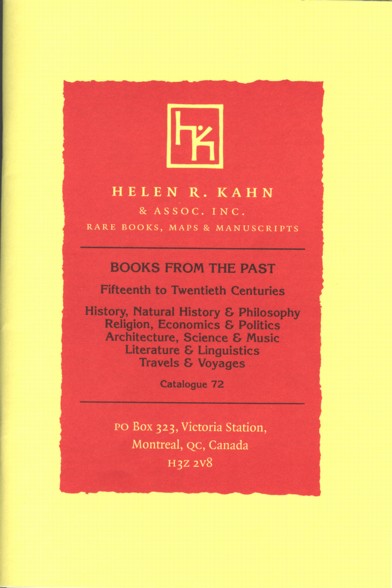 Books from the Past from Helen R. Kahn Rare Books

Helen R. Kahn and Associates Rare Books, Maps and Manuscripts has just printed their latest catalogue. The title is Books From The Past. This is not the typical Canadiana catalogue we have come to expect from the Montreal based bookseller. Most of these books come from an ocean away. These are European works, many from the days when all of Canada, not just most of it, was wilderness. The subjects are diverse, the languages multiple, and the centuries represented are five. There is definitely something for everyone here. We may not have space to describe the something you collect, but if not, you should pick up a copy of this catalogue. It is in here somewhere. Here are a few of the 100+ items we found.

Item 73 may be the most important scientific work ever, the Philosophiae Naturalis Principia Mathematica. This is the great work of Isaac Newton, which not only described observable phenomena, but explained their underlying principles. The most notable of his laws was that of gravity, which explained the motions of the various bodies in the solar system. Offered is a large-paper third edition from 1726, the last edition of the Principia published during Newton's lifetime. Priced at $25,000.

Item 46 provides a look at Paris just after Napoleon's final defeat at Waterloo. It is Paris; During the Interesting Month of July, 1815... The author and Parisian visitor was William Dorset Fellowes, a minor British official. He reports on the city following the restoration of Louis XVIII and the Bourbon monarchy. Kahn notes that among the interesting events for Fellowes was his taking up with a woman he met in France and abandoning his wife and daughter. $1,200.

French clergyman Francois Louis Gauthier had a warning for young men in 1785. His book is Traite contre les Danses et les Mauvais Chansons... Gauthier warns that men who sing songs with inappropriate lyrics or engage in dancing can expect eternal damnation. I wonder where that leaves most of today's popular musicians. Item 52. $425.

Everyone assumes that Boswell wrote the Life of Johnson, and he did, but not the first. Item 61 is Sir John Hawkins' The Life of Samuel Johnson. You can read this biography in case Boswell did not tell you everything you ever wanted to know about the amusing lexicographer and way more. Hawkins' 1787 biography of Johnson was actually the first. $800.

Now here is everything you ever wanted to know about Transylvania: Transylvania; Its Products and Its People. Written by Charles Boner and published in 1865, it tells you all about this part of Romania, except its vampires. However, this book was used by Bram Stoker as a reference when writing "Dracula." Item 17. $1,000.