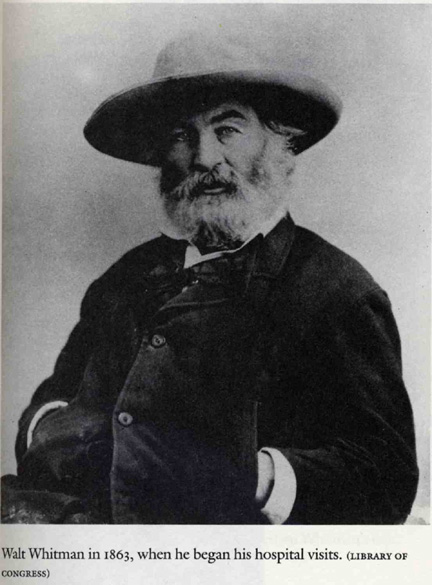 If you like easy answers or are averse to reading there are links at the top of this page to get you quickly to the exits. This is for those who read, are interested in history and can appreciate a complicated story. This is a two page discussion of an exceptional book, The Better Angel, by Roy Morris. It was printed in 2000 and is available in bookstores and online. It is the story of Walt Whitman in the years 1855 to 1865 and focuses on his experiences during the Civil War.

For those who don’t remember Walt Whitman was a poet perhaps best remembered for his very thin volume Leaves of Grass that was first self-published in 1855. In it he wrote “I am the man, I suffer’d, I was there.” Ten years later it would be true of his Civil War experience and he would become for many its voice, its impression, its memory.

Walt Whitman was, by every measure, a towering intellect. He was, before the war, the editor of the Boston Eagle. He corresponded with Thoreau and later enjoyed a close, if platonic, relationship with John Burroughs. He was also a bohemian and gay.

The outbreak of war in 1861 found him forty-two years old in an era when fifty was old. He was a Union man but did not hate the south or southerners. For him the union was the north and south together, not simply one side. That year, in New York, he wrote a series of articles for the New York Leader in which he describes patients in a local hospital. “There they are, many pining and wasting week after week with painful and incurable diseases – burning fevers, racking rheumatism, erysipelas, palsy, consumption, pneumonia, and all the long list; many brought in from sudden accidents, resulting in amputation, often followed by death.” And these aren’t the victims of war but rather only the debris of daily New York life. The war in the beginning was like opportunistic infection, local, and well to the south.

In time Walt Whitman took the train to Washington and into the penumbra of war if not to the front lines themselves. There he would find a place for himself in the hospitals where the wounded and often dying were brought. He was a naturally empathetic man, not a warrior, and he found his natural place ministering to the hopeful, the uncertain and the dying.

Outside of one hospital he saw “a heap of feet, legs, arms, and human fragments, cut, bloody, black and blue, swelled and sickening.” And Lincoln, reacting to the incompetence of General Ambrose Burnside, at that time, in private said, “If there is a worse place than Hell I am in it.”