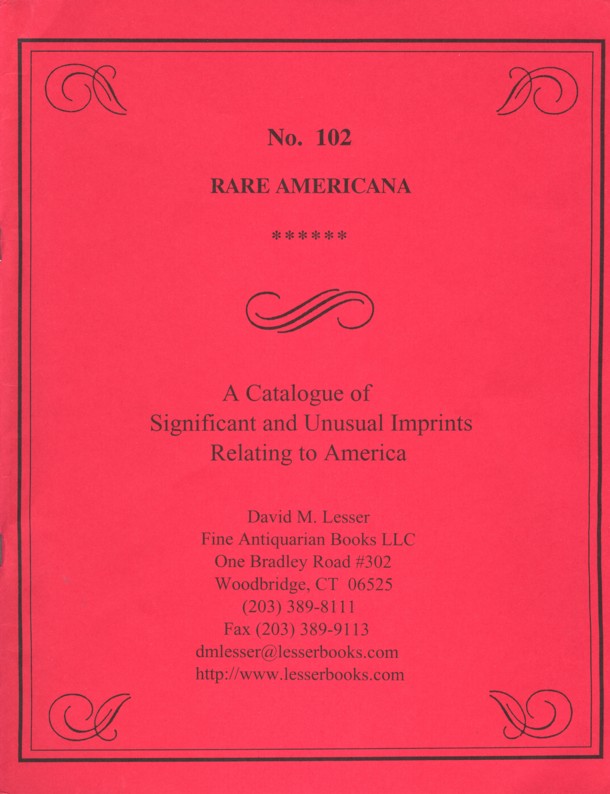 David M. Lesser Fine Antiquarian Books has issued their 102nd catalogue of Rare Americana. It is a collection of books and pamphlets from or relating to early America. Most come from the period from the Revolution to the Civil War, though there are exceptions on each side of the spectrum. As you look through this, and earlier Lesser offerings, it is hard not to be struck by how heavily the issue of slavery weighed upon the land. Sure there are many other subjects that were discussed during the day -- steamships, railroads, expansion, wars, mining, and always theology. Nonetheless, the number of writings about slavery, both pro and con, is striking. As time went on, the pamphlets and books became more numerous, the positions more fixed and virulent. It is easy to see, especially with the weak leadership of the 1850s, how civil war became inevitable. Now, here are a few of the 164 items offered.

By the time of the Mexican cession, which added new territories whose slave status was still uncertain, there were few willing to compromise on either side. The Wilmot Proviso, never passed into law, would have barred slavery from all of the new territories. Therefore, it is unusual to see an effort to reach a compromise, such as offered by Maryland slaveholder John L. Carey. Carey evidently understood that eventually slavery would have to be abolished, though he obviously had little respect for the slaves themselves. Writing of the noted black abolitionist Frederick Douglass, Carey states, "The man, Douglas, who rails against masters of America…owes it to Slavery in the United States that he was not born among baboons in Africa, where his progenitors chattered a half-monkeyish jargon, less than two centuries ago." It is not clear where Carey learned his world history or understanding of other cultures. Nevertheless, while opposed to the Wilmot Proviso's outright ban on slavery, he proposes it be limited to fifty years in the new territories west of the Rocky Mountains. He believed this would in time push slavery farther southward, to Central and South America, where "the facility with which races intermingle" would spell its end. His 1847 work is Slavery and the Wilmot Proviso; With Some Suggestions for a Compromise. Item 33. Priced at $450.

Another view on the expansion of slavery came from Missouri Senator Thomas Hart Benton in his Speech of Hon. Thos. H. Benton, Delivered at the Capitol at Jefferson City, May 26th, 1849. Benton was a powerful senator, the first to serve five terms, and a leading supporter of westward expansion. Benton was also a slaveholder, but one who became increasingly uncomfortable with the institution. He came to oppose the expansion of slavery and the institution itself, which led to the end of his long and distinguished senate career in the slave state of Missouri, which he had represented continuously since it was admitted to the Union in 1820. Item 21 is a rare St. Louis printing of the speech. $750.